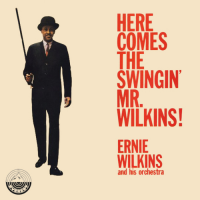 Once upon a time in America, big bands could swing their tails off. Count Basie was the gold standard, but there were many lesser-known bands in the 1950s that could rock the house. In some cases, they were studio bands assembled just to record one album. In other cases, they were touring working bands making a stop in the studio. Top musicians loved getting the call for these sessions, since the work reminded them of their big band days and the challenging charts were a ton of fun to sight read.

In the late 1950s, there was a spike in swinging big band albums, largely because labels wanted to put their new stereo format to the audio test. Yesterday I listened to a bunch of these now-forgotten albums. Here are six muscular swingers: