It wasn't until last year that I felt I had what it takes to make a record. Quarantine allowed me to have time to dig a little deeper into myself... What do I have to say? Who am I in this?
—Irene Jalenti 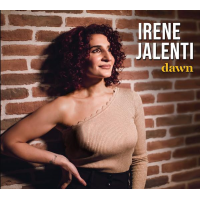 slideshow
Vocalist and composer Irene Jalenti claims a place in the jazz world for her vast musical talents on her long-awaited debut album, Dawn, set for an October 29 release on Antidote Sounds. The album collects four of Jalenti’s scintillating originals along with six smartly chosen covers and a stunning array of Baltimore’s finest instrumentalists, including guest appearances by two international stars: trumpeter Sean Jones and vibraphonist Warren Wolf.

Although Dawn is her first recording, Jalenti has for over a decade been an esteemed part of the jazz community in the combined Baltimore and Washington, DC areas (known locally as “the DMV,” for the District, Maryland, and Virginia). While fans, friends, and colleagues have often urged her to record her work, it was the recent COVID-19-imposed seclusion that finally let her conceive, develop, and execute a vision for her debut album. “It wasn’t until last year that I felt I had what it takes to make a record,” Jalenti says. Quarantine, she adds, “allowed me to have time to dig a little deeper into myself… what do I have to say? Who am I in this?”

The answers to those questions are on radiant display throughout the album. She plies her rich deep tones and masterly delivery to gripping performances of the standards “How Deep Is the Ocean,” “You and the Night and the Music,” and “Beautiful Love,” the latter two featuring Jones’s gleaming trumpet work. She also discovers new layers of emotion and meaning in the Brazilian classic “Carinhoso” and the Beatles’ “Let It Be,” and evokes an aura of profound mystery with Howard Blake’s “Walking in the Air.”

That’s to say nothing of the joys and marvels to be found in Jalenti’s own songs. She offsets the constructive criticism in the lyrics of “That’s How the Story Goes” with a hard-driving scat line. With “Moon and Sun” she concocts a dramatic meditation on the cycles of day and night, and thus of life. On “Alma Desnuda” and “Dawn,” Jalenti demonstrates her imaginative knack for musical settings of poetry—here the words of Alfonsina Storni and Meleager of Gadara, respectively.

It is a testament to her artistry that Jalenti was able to attract such formidable talents to accompany her. Along with Wolf (who illuminates “Dawn”) and Jones (who appears on five tracks), she demonstrates great synergy with her ace working rhythm section of pianist Alan Blackman, bassist Jeff Reed, and drummer Eric Kennedy. In addition, Argentine American guitarist Cristian Perez puts his sublime stamp on two tracks. Together they help to elevate Dawn into a triumph by helping Jalenti to find and express herself. “My sound came out when I finally allowed my own music to come out,” she says.

Irene Jalenti was born October 28, 1980 in Terni, in the central Italian region of Umbria. She is the scion of a musical family that includes her uncle, pop-star Sergio Endrigo, and cousin, guitarist Francesco Jalenti, among others. Her father, a record-store owner in Terni, immersed his daughter in music of all sorts and encouraged her to take piano lessons from a young age.

Jalenti’s unusually low singing voice had at first convinced her that she had no place in the family’s musical tradition. However, a workshop at Umbria Jazz Clinic changed her mind, and she began cultivating her vocals as a means to a career. She studied at Siena Jazz, made pilgrimages to hear and sing jazz in New York City, then ultimately earned a full scholarship to Baltimore’s Peabody Conservatory in 2010. She followed her Peabody degree with a master’s at Howard University in DC, then cultivated both a reputation and a following on the scenes of both her adopted cities. Jalenti formed a quartet with her respected Baltimore colleagues Alan Blackman on piano, Jeff Reed on bass, and Eric Kennedy on drums—which now forms the core of Dawn, Jalenti’s first album that fans and collaborators have spent years asking her to make.