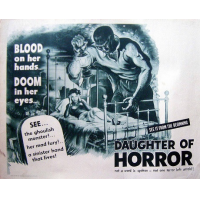 There were plenty of kitsch horror films made and released in 1953, including The Neanderthal Man, It Came From Outer Space and The Magnetic Monster. Among the exceptions, however, was Dementia, later known as Daughter of Horror. Completed in '53, the film wasn't released until '55 thanks to a tangle with Hollywood censors. The neo-expressionist film was directed by John Parker and starred Adrienne Barrett, both of whom are virtually unknown today. Comedian Shelly Berman can be seen as a stoned beatnik toward the end, and Marni Nixon did the overdubbed vocals.

What makes this black-and-white gem so terrifying is its complete lack of dialogue (that's one way to hold down the budget!). The music by avant-garde composer George Antheil, sound effects and creepy lighting (with eerie narration added in places later by Ed McMahon) all combine to raise suspense and neck hairs.

Some might view the film as high camp, but to me it's still one of the few psychological terror films from the decade that still holds up in an artistic way, give or take a few hammy elements. And it's wonderfully inventive, though borrowing in places from M (1931) and the 1945 British gothic horror film Dead of Night (above). John Cassavetes surely must have been influenced by the approach for his taut, independently-produced films of the late 1950s.

But enough cinema talk. Of note for JazzWax readers is that Shorty Rogers and His Giants perform Wig Alley (aka Morpo) in a club scene. It's one of the rare videos of this great band, minus a few regulars like Art Pepper and Shelly Manne. The Giants here featured Milt Bernhart on trombone, John Graas on French horn, Short Rogers in trumpet, Jimmy Giuffre on tenor sax, Howard Rumsey on bass and I'm going to guess that the pianist is Marty Paich, the tuba player is likely Gene Englund and the conga player is likely Roy Harte. I can't place the eye-twitching drummer.

JazzWax clip: Here's Dementia (aka Daughter of Horror), complete. Shorty Rogers and His Giants start at 43:38...