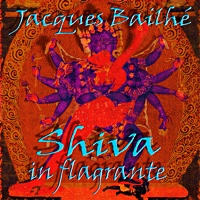 What happens when you mix years touring on bass with Big Lost, a critic once described as “Folk-Baroque-Rock,” stir in producing hundreds of tracks for film and commercials, a drum solo behind a fire-breathing stripper in a roller rink in Bangkok, sitar lessons in India and Nepal, and chanting prayers as a Buddhist monk? You get Shiva in flagrante (The Hindu god Shiva in flames of passion). Bailhé laughs, “Chanting prayers in temples is a fascinating way to experience the overtone series!”

Building a style he describes as “reckless abandon,” Bailhé explores ideas through music and narrative dance. The scenario for Shiva in flagrante tells the tale of a Harley-Davidson‑riding Shiva falling in love, mating with the goddess Parvati, and the birth of their child in the final track titled “The Facts of Creation.” “That story had to be told in Jazz,” says Bailhé.

A distinctive new voice in instrumental music, Jacques Bailhé unleashes fiery passion and spellbinding narrative that stuns audiences with rhythm and melody woven with sophisticated harmony and counterpoint. “I don’t understand why so many composers seem to abandon melody. Isn’t it probably the most powerful aspect of music?” he asks. “I don’t think much in chords. I seem to work from independent melodic lines in the tradition of contrapuntal style.” His musical inspirations come from early Weather Report and Miles Davis, Brian Blade and the Fellowship Band, Hiromi, ethnic artists like Ravi Shankar and Zap Mama, and others like Hendrix, The Beatles, and producers and engineers like Al Smith, George Martin, and Geoff Emerick, quickly pointing out that “engineering is the yin of the yang. But studying scores, especially by Vivaldi, Bach, Beethoven, Berg, John Adams, Gil Evans, and Miles was a revelation. They make it look so simple.”

Stream multi-instrumentalist Jacques Bailhé’s new album, Shiva in Flagrante on the artist’s official music platforms and follow him on social media for updates on his upcoming release due this fall will, also focused on music for dance. And BTW, he’s always on the lookout for choreographers for collaboration. Reach out through the artist’s email to connect.

Jacques Bailhé’s grandfather, George Bailhé was an award-winning pianist and arranger, working for Cecil B. Demille in the ‘30’s. His great uncle Gaston Bailhé was a fine violinist whose score collection is held at Indiana University. His father sang on the radio and appeared in the '30s movie College Days.

Traversing the world of filmmaking and composition, Bailhé graduated magna cum laude from Art Center College of Design with a BFA in Film Production and acquired deep experience in a wide array of music, composing and producing with some of Los Angeles’s finest composers, studio players, and engineers for film and advertising, including with Dolly Parton for her theme park. “I’d say I’m self-taught except I learned so much working with those people and in my early rock & roll days, talking music after gigs in bars (what he calls “bar theory”), but also from engineers at Paramount, Capitol, Sony, RCA Hollywood, Jimmy Hite at Margarita Mix, and the legendary Buzz Knudsen at Todd-AO.”