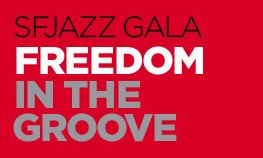 The Gala — which celebrates the near completion of the $63 million “The World is Listening” capital campaign for the landmark SFJAZZ Center opening on Martin Luther King, Jr. Day, January 21, 2013 — will honor the legendary pianist Ahmad Jamal with a performance by the jazz great himself.

The SFJAZZ Collective will perform the music of Stevie Wonder and original compositions. The Collective features a one-time-only lineup with current members Mark Turner on tenor saxophone, Stefon Harris on vibraphone, Edward Simon on piano and Robin Eubanks on trombone. The Collective will be rounded out by former Collective drummer Eric Harland and substituting for current members, alto saxophonst Miguel Zenón, trumpeter Avishai Cohen and bassist Matt Penman will be Antonio Hart, Mike Rodriguez and Robert Hurst, respectively. The award-winning SFJAZZ High School All Stars will perform.

Legendary saxophonist Maceo Parker and his band, plus special musical guests, will close out the show with a funky after jam.

SFJAZZ is nearing the completion of the new SFJAZZ Center, the first stand-alone performance and education center dedicated to jazz. The Center, designed by award- winning architect Mark Cavagnero, will open on Martin Luther King, Jr. Day, January, 21 2013. Located at 205 Franklin Street in San Francisco’s vibrant Hayes Valley, the SFJAZZ Center will be a hub of art, music, culture and community in the Civic Center performing arts district.