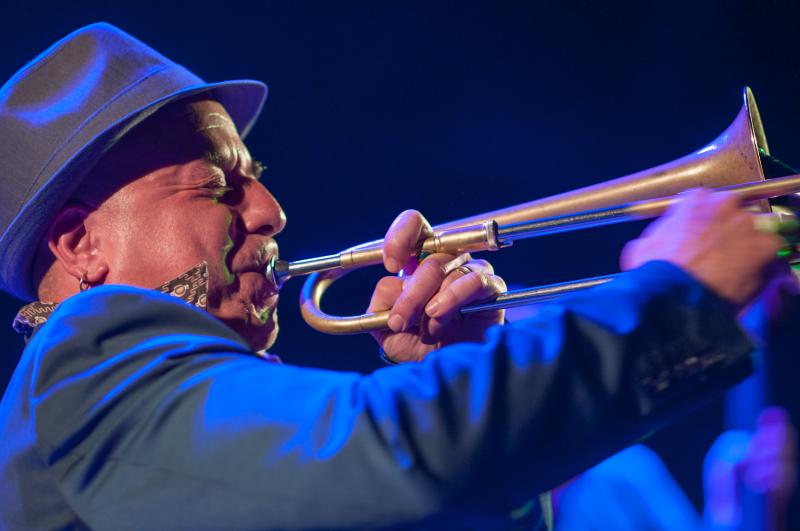 slideshow
Sex Mob is a band out of time: a smartly old-fashioned quartet of world-class musicians with a satchel full of charts. Sex Mob is a band of the now: post-modern waltzes mutating into dub-echoed free jazz. Sex Mob is social music: a rollicking midnight set with clatter and drinks and a band. Sex Mob is a happy contradiction: an experimental jazz outfit whose music has slid readily into the mainstream via Saturday Night Live, MTV, and National Public Radio. Sex Mob has returned with Cinema, Circus & Spaghetti: Sexmob Plays Fellini: The Music of Nino Rota (Royal Potato Family, 2013).

The recording is their first new studio album since the Grammy Award-nominated Sexotica seven years ago. A venerable New York City music institution, Sexmob turned 17 this year. The band's four founding members—Steven Bernstein, Briggan Krauss, Tony Scherr and Kenny Wollesen—defy genre, instead replacing it with their own inimitable musical language.

“The whole thing about the music we make is that it comes from this tradition, but at the same time we don't really care about this idea of playing traditional or nontraditional music. The most important part is to have your own thing," says Sex Mob's charismatic leader and slide trumpeter, Steven Bernstein. “You have to be unflinching. We're not doing this to get rich or famous or trying to force the issue. We're doing this because we all love Sex Mob."

It's fitting then that for Sex Mob's return to the LP format they chose to re-imagine the music of Nino Rota. It was Rota's imaginative compositions that set the tone for the surrealist films of the legendary Italian director Federico Fellini. The filmmaker once said, “My films, like my life, are summed up in circus, spaghetti, sex, and cinema."

“Seeing the films was my first exposure to this music. I grew up in Berkeley, and we always had art-movie houses, so we'd go see Fellini films. It's not like I was a huge Fellini fan, but it was just part of being a high-school kid," explains Bernstein. “But then what happened is I was 19 years old and I went to my friend’s house, and he said, ‘Check out this record!’

It was Hal Willner's Nino Rota tribute, and I was like, ‘Wow! Look who’s on it?’ And it's Carla Bley, Steve Lacy, Jaki Byard. It's Bill Frisell's first recording. It's Wynton Marsalis' first recording. And then Blondie is on it. Not the full band, but Debbie Harry and Chris Stein. And both of us were just getting our minds blown. We're like, 'Wow! What is this? Who is this guy?’ And of course the music was super memorable, and the very idea was just so unbelievable and audacious and cool. It was what we'd all been waiting for."

With that kind of inspiration as the wind at their backs, these torchbearers of the NYC downtown scene—genre notwithstanding—tracked the majority of the album in one afternoon at Brooklyn Recording in Cobble Hill, Brooklyn. Diving headlong into Rota's iconic Fellini film melodies, Sexmob fearlessly explodes all musical parameters, steering the arrangements through gutbucket swing and igniting them with New Orleans brass band fervor; dubbing them out into ether and blasting them with punk jazz abandon. Rota's classic themes are the perfect foil for Sex Mob's improvisational psychedelia, old world beauty and hypnotic rhythms.

“These themes are so strong, I figured if we added that Sexmob thing to it, how could we go wrong," concludes Bernstein. “Our fans are, in general, music heads. That's one of the things about Sexmob, since the beginning, it's always been about getting all those people who aren't necessarily jazz fans to go, 'Oh wow! I like this,' because we just set out to play good music."