You've never heard anything like this before! Songs of refugees' struggles and women empowered, with lyrics in Ladino and Spanish, set in a modern, energetic and original jazz/flamenco style. Audiences of all backgrounds have come away amazed.
&#151Alan Lewine 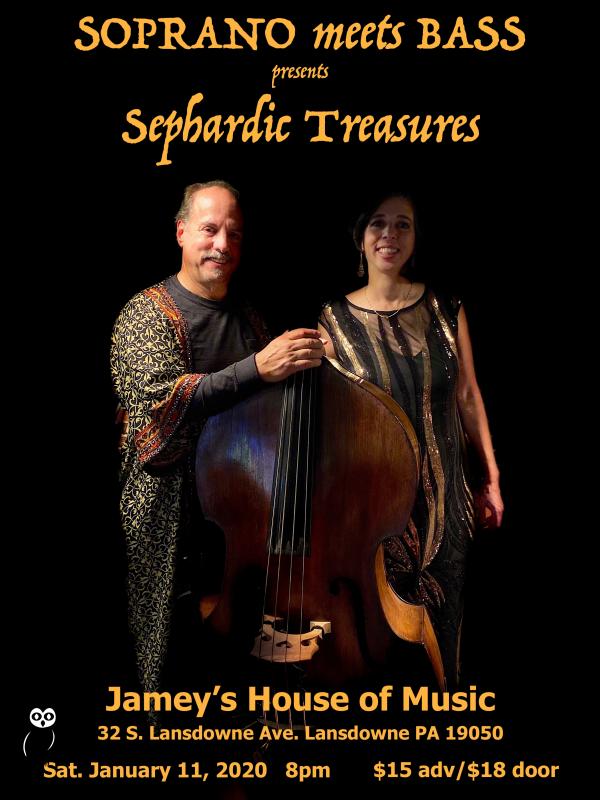 slideshow
Live at Jamey's House of Music in Landsdowne, just outside Philadelphia on January 11, 2020, Soprano Meets Bass will preview their soon-to-be-released album Sephardic Treasures for all to enjoy.

Soprano Meets Bass, with Alan Lewine (double bass) and Ana Maria Ruimonte (soprano), offers a program of Sephardic Treasures, (described in one review as “legendary’) selected from the Sephardic Romancero, collections of songs originating in 12th to 15th Century Spain. While these songs originate in the Jewish community, the tri-cultural nature of Moorish Spain leads to much influence from the Christain and Arabic/Muslim communities whcih with the Jews integrated and interacted (sometimes comfortably, sometimes less so as the tides ebbed and flowed). During the 20th Century these songs were transcribed by ethnomusicologists from the women’s oral tradition in Sephardic communities around the Mediterranean in Morocco, Palestine, the Balkans and elsewhere. Soprano Meets Bass incorporates elements of Classical, Jazz, Flamenco and Middle Eastern music in their original and lively reimagining of these songs from Jewish Medieval Spain.

Featuring, from their forthcoming album:

Alan Lewine is a bassist and composer currently living in the Philadelphia region and the founder of Owlsong Productions. Lewine has performed and recorded all over the U.S., Europe and Latin America. His influences include all forms of music. By way of example, his latest project, Soprano Meets Bass: Sephardic Treasures–sets medieval Sephardic songs in a jazz/flamenco/Mideastern style with a Spanish classical soprano singing the lyrics in Ladino, two American jazz and one klezmer musicians, an Israeli percussionist, flutist and shofar player, and Spanish flamenco guitar, percussion and piano. Eclectic? Yes, and previews have yielded high praise. The record was recorded in Brooklyn, Manhattan, Madrid, and Kfar Tavor (Israel), produced by Alan and mixed and mastered b y multi-Grammy award winner Mike Tarsia.

The main focus of a career launched in 1978 has been jazz, but Alan has performed with afropop stars as well as many jazz and some classical notables in major and minor cities throughout the US and in several other countries. Alan began playing string bass in 1978. He studied piano as a child, and later studied composition and arranging. Mainly an autodidact, Milt Hinton was a mentor early in his career. Other important bass mentors have been Ray Brown, John Clayton, Lynn Seaton, Bruce Gertz and Leroy Vinnegar. Alan also studied traditional Ghanaian (Ewe) percussion with Obo Addy and Balinese gamelan with I Nyoman Suadin, flamenco with Julián Vaquero and Victor Monge, and traditional country blues with Johnny Never. Alan has worked with many of the great names in jazz over the years, including Eddie Daniels, Kenny Davern, Richie Cole, Joe Henderson, Clifford Jordan, Henry Threadgill, Vinnie Golia, Anita O'Day, Sheila Jordan, Mose Allison, Butch Miles, Barney Kessel, Herb Ellis, Roy Hargrove, and old masters like Gus Johnson, Sweets Edison, Mickey Roker, Stephane Grapelli and many others.

Also a scholar, Alan taught music theory from a jazz perspective at Portland State University in Oregon and has written about jazz theory, ethnomusicology and Sephardic culture, and various other subjects. He currently serves on the Boards of Directors of the International Society of Bassists and Philadelphia’s Jazz Bridge Project.

Ana María Ruimonte, born and raised in Madrid, Spain, is a classical singer experienced in roles as both soprano and mezzosoprano. She obtained her degree at Spain’s leading vocal conservatory, the Escuela Superior de Canto of Madrid in 2006, and studied further in Nuremberg, Philadelphia and New York. She was a finalist at international competitions in Foggia, Italy and Classical Singer in Chicago. Ana María appeared numerous times on Spanish National Radio and Television (RTVE) and has been featured on Cuban radio and television as well.

As a resident singer with Madrid’s Teatro Real (Royal Theater), Ana María shared the stage with most of the biggest stars of the opera world, such as Plácido Domingo, José Carreras, Montserrat Caballé and Dolora Zajick, appearing on opera CDs released by Deutsche Grammophon and other major labels. She also appeared on several major European DVD and BluRay releases and frequently on Spanish national television.

Later, she spent some years (and still holds a seat) as a full-time tenured member of the National Chorus and Orchestra of Spain (OCNE) with whom she toured the world with famed conductor Rafael Frühbeck de Burgos, including appearances in 2009 at Lincoln Center in New York.

Since relocating to the US in 2012, Ana María has released 5 CDs, mostly of Cuban classical music, and performed in many cities in the US, Belgium, Netherlands, throughout Spain, Israel in both Jerusalem and Tel Aviv, Havana, Matanzas and Santiago de Cuba and appeared on Spanish, American and Cuban television and radio. Excellent starred reviews have also been forthcoming.

Ana María has performed annually by invitation since 2016 as part of the International Festival Cubadisco and recorded for the Owlsong label with piano maestro Huberal Herrera (“El Lecuonista”), members of Cuba’s National Symphony Orchestra and various others among Cuba’s best classical musicians and with Alan Lewine.