Seeking Funds for His Next Project Via Kickstarter, Eric Person Joins Growing Crowd of Creative Types 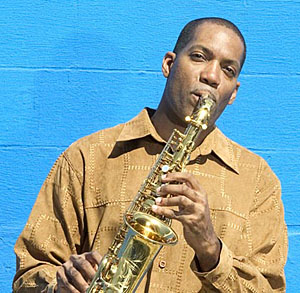 slideshow
Saxophonist Eric Person is down to the last week of his Kickstarter campaign to fund his proposed next album Thoughts on God-Project of Hope.

The 48-year-old St. Louis native, who has performed with jazz luminaries including McCoy Tyner, Dave Holland, Chico Hamilton, and the World Saxophone Quartet, so far has attracted 110 backers who have pledged $10,597 toward his $20,580 Kickstarter goal. That figure represents the amount Person will need to produce the CD, including recording studio time, mixing, mastering, and manufacturing, as well as rehearsal and recording fees for a dozen musicians.

He first conceived the project way back in 1987, and decided to try to make it a reality now after seeing other jazz musicians successfully fund recording projects through Kickstarter, a website that calls itself “the world's largest funding platform for creative projects."

Under the Kickstarter model, “a project must reach its funding goal before time runs out or no money changes hands....Creators aren't expected to develop their project without necessary funds, and it allows anyone to test concepts without risk." Each creator determines what funders will receive, and depending on the project and amount pledged, the backer's rewards may range from an autographed copy of the finished product to a public credit in the liner notes to more elaborate customized thanks, like a private live performance.

Person, who previously has recorded eight CDs as a leader, has not only written the music but also already has a cast of players in mind, including himself and Craig Bailey on alto saxophones; Patience Higgins and Sylvester Scott on tenor saxophones; James Zollar and Duane Eubanks on trumpets; and Curtis Hasselbring on trombone, with a rhythm section including Brian Carrott (vibraphone), Adam Klipple (keyboards), Corcoran Holt (bass) and Shinnosuke Takahashi (drums). You can see and hear Person speak about Thoughts on God-Project of Hope in the video in the embedded window below.

Although Person is using Kickstarter as a vehicle for a personal pet project of long standing, he's just one of a number of well-known musicians, artists, technologists and other creative individuals turning to the site as a way to raise money for all sorts of endeavors.

For example, pianist Matthew Shipp, who performed in St. Louis in October, is working with multimedia artist and filmmaker Barbara Januszkiewicz on funding an independent film called The Composer through Kickstarter. Saxophonist Azar Lawrence, who's played with major artists such as McCoy Tyner, Freddie Hubbard and Miles Davis, is seeking funding for a live CD of his original music to be recorded at the Jazz Standard in NYC. And the producers of Mingus on Mingus, a documentary on the legendary bassist and composer Charles Mingus to be directed by his grandson Kevin Ellington Mingus, also currently are trying to raise money via Kickstarter.

It'll be interesting to see what role Kickstarter and other novel funding ideas can play going forward in the creation and dissemination of new music. In the meantime, it provides a way for even those of modest means to support projects of interest without much risk. Here's hoping Person makes his goal, and perhaps StLJN's always-perspicacious readers will show a little hometown love to help him get there...