Translator's Note is nuanced and empathic, occasionally frolicsome, and gorgeously unorthodox.  --All About Jazz 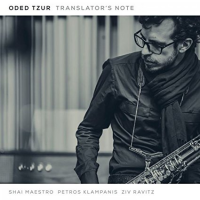 Starting in 2012, Oded led a rehearsal in Brooklyn with Shai Maestro, Petros Klampanis and Ziv Ravitz. The immediate connection between the four musicians led to the creation of the Oded Tzur Quartet, an ensemble that explores relationships between the jazz setting and Indian musics melodic architecture.

Oded Tzur is a New York City-based saxophonist, composer and bandleader. His work draws on Indian classical music and Jazz, and explores fundamental connections between different musical traditions. Tzur is also responsible for the development of “Middle Path," a saxophone technique that extends the instrument's microtonal capacity.

Coming from the Tel Aviv jazz scene Tzurs musical background consisted of rigorous training in a number of musical styles. His curiosity for improvised music led him to discover the ancient art of Indian classical music, which has become the main focus of his work. In order to pursue the rare prospect of playing Indian music—a style heavily based on microtonality—on a western instrument such as the saxophone, Tzur dedicated about 10 years to the work of expanding the instruments microtonal scope.

Shai Maestro, a 27 year old native of Israel, has already left his mark on the jazz world. After playing, touring and recording for five years with bassist Avishai Cohen, Maestro relocated to New York, where he founded his groundbreaking trio: the Shai Maestro Trio. The pianist keeps a busy schedule, playing as band leader as well as a sideman. He has shared the stage with many world renowned musicians such as Jorge Rossy, John Patitucci, Keith Carlock, Nate Smith, Kendrick Scott, Scott Colley, Jimmy Green, and many many more.

Petros Klampanis, described by JazzTimes as a formidable bassist and composer, grew up on the Greek island of Zakynthos, surrounded by the confluence of Mediterranean and Balkan folk music. Since his relocation to New York City in 2008, Klampanis has performed alongside some of the citys renowned jazz musicians, including saxophonist Greg Osby, pianist Jean-Michel Pilc, and drummer Ari Hoenig.

Ziv Ravitz was born in Israel to a family of musicians. He was drawn to music at an early age and played a variety of instruments before focusing on the drum set. Starting his professional career at the age of 13, he quickly acquired a reputation in a variety of musical styles.