Saxophonist Jeff Coffin & The Mu'tet To Release 6th CD, "Into The Air, Sept. 4 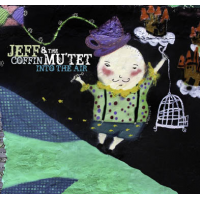 slideshow
Saxophonist/composer Jeff Coffin has maintained a singular balancing act for the last 15 years: His demanding, high-profile stints with Bela Fleck and the Flecktones and Dave Matthews Band provide a creative counterweight to his thriving careers as bandleader and educator. Since 2001, he’s led the one-of-a-kind Mu’tet, whose 6th CD, Into the Air, expresses off his unique, wide-ranging musical passions and will be released by Ear Up Records on September 4.

“This is not easy music to play, but these guys make it sound easy,” says Coffin of his current Mu’tet colleagues—Bill “The Spaceman” Fanning, so attuned to Coffin’s approach that “it’s like listening to me playing trumpet”; keyboardist (and flutist) Kofi Burbridge, a veteran of the Derek Trucks/Susan Tedeschi Band; electric bassist Felix Pastorius, 30-year-old son of Jaco, hired on the recommendation of Flecktones bassist Victor Wooten (Felix also plays with the Grammy-winning Yellowjackets); and drummer Jeff Sipe, another longtime collaborator and a founding member of rock experimentalists the Aquarium Rescue Unit. Special guest Lionel Loueke, the Beninese singer-guitarist, is featured on two numbers, including the like-named “Loueke,” composed by Coffin and Pastorius.

“All of my favorite musicians—Ornette Coleman and Louis Armstrong and Bob Dylan and Radiohead—have a similar quality,” says Coffin. “They all give me goose bumps. I think if you’re not getting goose bumps from what you’re doing, if your hair isn’t standing on end, then the music is missing something. That’s what I’m looking for when I play and write and explore. Improvisation is, by original definition, about surprise or the unexpected. I want to be surprised.”

Indeed, the Mu’tet’s name was inspired by the Shelley poem, “Mutability” (Man’s yesterday may ne’er be like his morrow; Nought may endure but Mutability”).

When Jeff Coffin enrolled in the renowned jazz program at North Texas State (now called the University of North Texas), many of his fellow saxophonists were trying to emulate Michael Brecker, Bob Berg, and Bob Mintzer. Coffin became determined to find his own voice.

A turning point came when a percussionist at the school turned Coffin on to African music. Coffin was carried away by the revelatory Juju music of Nigeria’s King Sunny Ade, Congolese field recordings, and much more. “It changed my life,” he says. “Just realizing there was this ceremonial music for everything: for birth, death, puberty, marriage, rain, drought. I had no idea it existed. Listening to these four- and five-year-old African kids dancing and singing in polyrhythms blew my mind.”

Coffin’s hunger for different kinds of music, from Asia and Europe and India as well as New Orleans and Mississippi, has never stopped. He made the unusual (for an improvising musician) move to Nashville in 1991 because “it felt like New England to me.” (Coffin, 47, was born in Massachusetts and grew up there and in Maine and New Hampshire.)

In 1997 Coffin made his solo recording debut with the Jeff Coffin Ensemble’s Outside the Lines, featuring Fanning. That same year he joined Bela Fleck and the Flecktones, remaining with the group until 2010 (and earning three Grammys during his tenure). Following the 2008 death of saxophonist LeRoi Moore, a founding member of Dave Matthews Band, Coffin joined DMB. He’s featured on their upcoming CD Away from the World, to be released September 11, and is the subject of a cover story in DownBeat magazine’s October issue.

A passionate music educator and a top Yamaha Performing Artist/Clinician, Jeff has presented more than 300 clinics at schools of all kinds around the world. “I love teaching and being involved with students,” he says. “I feel it might be the most important thing I do. I hope students experience something beautiful and life-changing through music.”

Jeff Coffin & the Mu’tet will be appearing 8/10-12 at Blues Alley, Washington, DC; 8/13 Nighttown, Cleveland; and 8/18 Snowbasin Resort, Huntsville, UT, with additional dates to be announced.