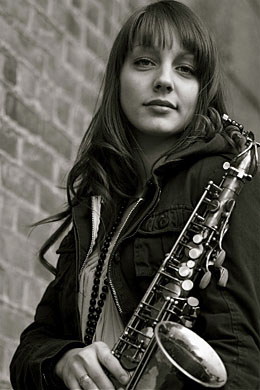 slideshow
(Boston, MA - September 28, 2009) Saxophonist Hailey Niswanger (pronounced NICE-wonger), a 19-year-old sophomore studying jazz performance at the Berklee College of Music in Boston on a full scholarship, has been selected as the new alto saxophonist in the Either/Orchestra, saxophonist Russ Gershon, the founder and music director of the Cambridge, MA-based band announced today.

Miss Niswanger is the first woman to become a full-time member of the ensemble (as opposed to appearing as a guest vocalist or substitute instrumentalist) and takes over a chair in the horn section previously occupied by Miguel Zenon and Jaleel Shaw, among others. She is coming off a summer during which she established herself nationally after the release in June 2009 of her self-produced recording debut Confeddie that has been played on more than 100 radio stations around the U.S.

“I’m really excited about this opportunity to perform in and tour internationally with a large ensemble and play challenging new music not only from the American modern jazz tradition but from Latin America, Africa and other cultures as well," Miss Niswanger said when informed on of her selection.

“Hailey came in well prepared and did a great job--in fact she 'smoked' her audition," Gershon said. “She seems like a level-headed, intelligent young lady who really loves to play and has digested a lot of diverse influences in her music," he added. “Hailey not only has plenty of technique and solid musicianship, but also plays with fire and swing," Gershon continued. “It's a pleasure to meet someone like Hailey who is talented, accomplished and still at an age where she will learn every day. I'm looking forward to performing with her in the Either/Orchestra sax section and writing music to feature her unique personality."

Miss Niswanger will also be featured beginning October 1 on NPR's “JazzSet With Dee Dee Bridgewater" recorded “live" performing with her quartet at the 2009 Mary Lou Williams Women In Jazz Festival held in May 2009 at The Kennedy Center in Washington, D.C. where she appeared as a headliner having won the festival's saxophone competition in 2008. Three songs from Miss Niswanger's self-produced and self-released debut CD Confeddie will be showcased on JazzSet which is carried on 118 NPR stations and at jazzset.npr.org (check local NPR stations for specific broadcast dates and times).

Although she also plays soprano sax, clarinet and flute, Miss Niswanger only plays alto on Confeddie, an authoritative straight-ahead quartet recording featuring modern jazz classics by Thelonious Monk, Herbie Hancock, Joe Henderson, Wayne Shorter, Kenny Dorham and Benny Golson. She also penned the title track whose name is a combination of “confetti,” to convey the festive feeling that permeates the album, and the first name of legendary saxophonist Eddie Harris in whose style it was written.

Confeddie spent two months among the top 100 jazz albums in the country, three weeks on the JazzWeek Top-50 Chart and was on the CMJ (College Music Journal) Jazz Top-40 chart for 11 consecutive weeks remaining in the Top-10 for a month and three weeks in the Top-5 including two at its peak position of #4. The CD was also the #1 most added jazz title at college radio the week of its release.

Previously she toured with the Next Generation Jazz Orchestra performaning at the North Sea Jazz Festival in The Netherlands and on the main stage of the 51st Monterey Jazz Festival (2008); played with the Gibson/Baldwin GRAMMY Jazz Ensemble in Hollywood and the Jazz Band of America in Indianapolis (2008 & 2007); performed with the Pacific Crest Jazz Orchestra and Combo at the IAJE conference in New York City and at pre- festival events for the 50th Anniversary Monterey Jazz Festival and attending the Vail Jazz Workshop under the direction of John and Jeff Clayton where she performed on the main stage of the Vail Jazz Festival with Taylor Eigsti who later invited her to appear with him at Jazz Alley in Seattle (2007); and receiving scholarships to attend the Berklee College of Music Summer Jazz Workshop under the direction of Terri Lyne Carrington (2006 & 2007).

A 2008 graduate of West Linn High School near Portland, where she moved with her family in 1992, Miss Niswanger played saxophone and clarinet in the school’s jazz and symphonic bands and was also a member of Thara Memory’s elite Pacific Crest Jazz Orchestra and Combo. In addition to performing in the Portland area during the summer of 2009, as she did in 2008, she taught piano to 5-7 year olds and woodwinds to 12-18 year olds at Willowbrook Arts Camp where as an eight-year-old she played her first note on a woodwind (clarinet).

The 10-piece Either/Orchestra has been quietly redefining the meaning of “big band" since its founding by saxophonist/composer Russ Gershon in 1985. Influenced by Ellington, Sun Ra and Gil Evans, along with a myriad of inside and outside jazzers and popular music from around the world, the band hit the road in the late 1980s like an indie rock band, bringing cutting edge composition and improvisation to big cities and small towns all over the US. Over the course of the past decade the E/O has integrated strong Latin influences and become one of the world's leading non-Ethiopian exponents of Ethiopian pop and jazz, traveling to Addis Ababa to record a live album and collaborating with the masters of Ethiopian music in stirring concerts across Europe and North America.”