From beginning to end Refuge in Sound is an engaging recording filled with melodious purpose. 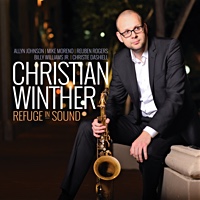 Saxophonist Christian Winther's new release Refuge In Sound espouses the words of the great Louis Armstrong who once stated that “What we play is life." Since moving from Denmark to New Orleans in 1997 Winther's music echoes those sentiments while he's immersed himself into the city's rich culture while finding his voice as a leader and thriving participant in the jazz community.

The phrase “wider recognition" is often used to describe lesser known yet equally talented artists and that statement holds true for Winther an erudite musician who's studied with jazz greats Ellis Marsalis and Harold Battiste. He's performed and lead ensembles that have included Herlin Riley, Ali Jackson, Rodney Green and Marcus Printup and produced a number of noteworthy recordings: 2011's From The Sound Up (SteepleChase) and 2013's Two People, a duo collaboration with pianist Richard D. Johnson featuring the music of Billy Strayhorn.

With a glowing tone, exquisite control and expressive lyricism, Refuge In Sound is the next chapter in the saxophonist's jazz-flife story, one that exudes a melodious quality through a passionate pursuit of the art-form as Winther states “This release is about my personal connection with music. Playing from a place within and using my sound to share the stories I have to tell." These stories are now articulated by a stellar group of in-demand players that include the sinuous strings of guitarist Mike Moreno, the burning piano of Allyn Johnson and a flexible yet stalwart rhythm center provided by bassist Reuben Rogers and drummer Billy Williams Jr. and memorable vocals from Christie Dashiell on “One for Mulgrew."

A strong sense of melody and swing permeates Refuge In Sound which features original compositions written by Winther over the last couple of years; fully representing his identity as a composer and band leader. This is witnessed in the opening title track and the fiery up-tempo “Outsider" where the music dances with vibrant solos and crisp trades girded by the rhythm section's tight pocket. The musicians move in simpatico with an almost telepathic vibe which is a testament to both Winther's writing and their musicianship.

There are also other jewels to be discovered like “One For Mulgrew" a tune dedicated to the great pianist Mulgrew Miller who passed in 2013 yet his masterful touch and compositions continue to inspire. The track possesses a flowing elegance colored by rich harmonies from vocalist Christie Dashiell and fervent statements from Allyn Johnson, Winther and Reuben Rogers' probing arco.

What comes across so lucidly in Refuge In Sound is the quality of the music's sound. As Winther so eloquently comments “For me everything I play on my horn comes from my sound and I think that sound is what makes us identifiable as musicians." This is most definitely the case throughout the recording and heard in “Tell Me Your Truth" a gorgeous ballad that speaks to Winther's idea about not being afraid of saying what you have to say, listening and letting others take part. Its songlike attributes, the band's interaction and deep phrasing from Winther's horn create a simply rapturous listening experience. Other highlights include the street-edged vibe of “Blues Life" about the daily challenges of being a jazz musician and the beautiful exchange between Winther and Allyn Johnson's excellent piano work in “The Sleeping Giant" a tune written for Winther's 9 year old daughter Mila. From beginning to end Refuge in Sound is an engaging recording filled with melodious purpose from the masterful Christian Winther.