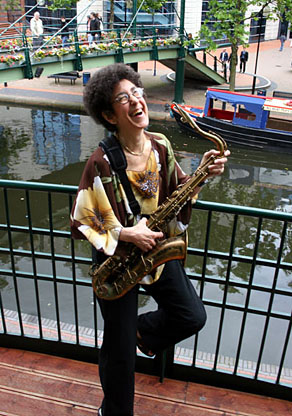 This event, “Women Composers of Queens", Nov. 16 at 7 PM at LaGuardia Performing Arts Center, is a concert of Sudhalter's own 11-piece Astoria Jazz Band, co-produced by LaGuardia Performing Arts Center, Sudhalter, and by 'Circuit Productions' as part of their community outreach series, Rhythm Journeys: Masters of Jazz and World Music . Tickets are $13 or $10 for students, seniors and musicians: 718.482.5151.

Vocalist/organist Sarah McLawler, an incredible musical talent, has written and performed for over 50 years, and her stunning ballad, “Go Love", a hit in the 1950s, will be sung in a special first-ever duo by both McLawler herself together with band vocalist Myrna Lake.

A panel discussion by several of the senior women composers including McLawler will precede the concert at 7 pm, and an open jam session will follow the concert at 9:30 P.M. until 11 (all musicians welcome).

Sudhalter founded and has led her Astoria Jazz Band since 1986. She independently tours Europe three months a year, and her most recent CD, “Shades of Carol", was released in Rome on Alfa Records and RAI Trade. Her seven-week summer 2007 tour included appearances with saxophonists Alan Barnes and Greg Abate in England's Swanage Festival, organist Vito di Modugno in Bari, Italy; pianist Craig Milverton in Birmingham, England, and much more. Her band has received over twenty-five grants from the city and local arts councils, and has a full concert schedule planned for 2008.

Sudhalter is profiled extensively in W. Royal Stokes' latest book, “Growing Up With Jazz: Twenty-Four Musicians Talk about Their Lives and Careers" (Oxford, 2005). *The performance, Women Composers of Queens is made possible (in part) by the Queens Council on the Arts with public funding from the New York City Department of Cultural Affairs; and in part, with funding to Circuit Productions, Inc. from the New York State Music Fund, established by the New York State Attorney General at Rockefeller Philanthropy.