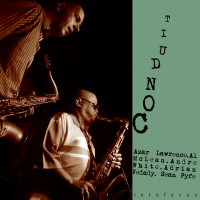 Together, Lawrence and McLean cast a distinctive modern light on iconic jazz standards, but their affinity to post-Coltrane Jazz is unmistakable. Conduit is a hair-raising journey into the most evocative and hallowed spaces of the style; taut, deep and dramatic, it tells a distinctive story of spiritual inspiration and the power that music affords us to travel beyond ourselves, and experience redemption.

Reclaimed church Le Musée des Maîtres et Artisans du Québec provided the perfect setting for the prayer-like performance, and was a striking setting for the album’s accompanying films. Cole captured the session on camera. He explains, “as the project has its life on social media, the films will be put to work”.

McLean and Lawrence are joined on Conduit by the best of the Montreal Jazz scene; Andre White on drums, Adrian Vedady on bass and newcomer Sean Fyfe on grand piano.