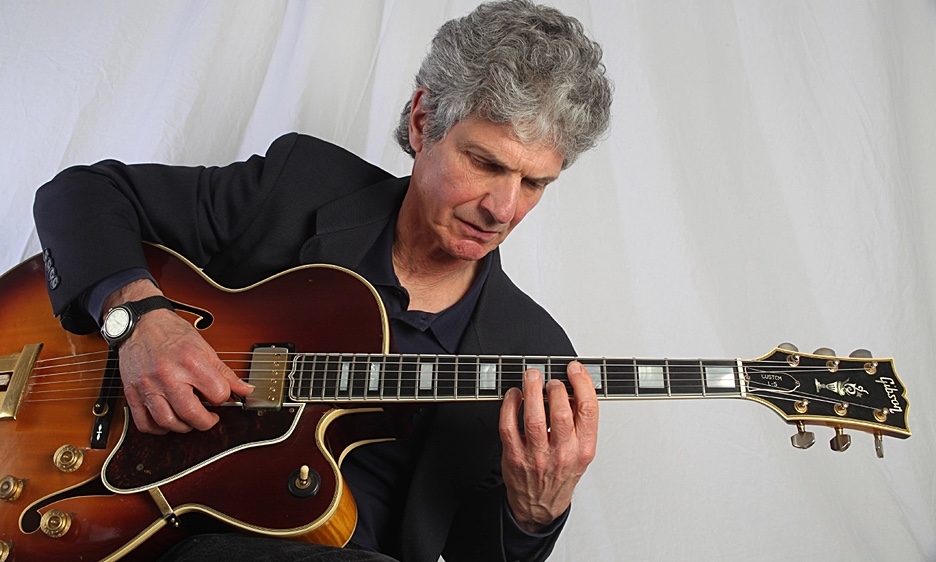 [During the pandemic] it became more and more difficult to try out the pieces, so it took a while to get them to a point where we were all happy with them. But I was confident that everything would come together.
—George Cotsirilos 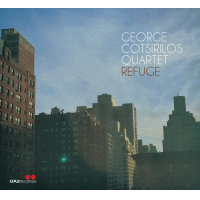 George Cotsirilos pushes into new frontiers with the May 20 release of Refuge (OA2). The guitarist and composer’s follow-up to his acclaimed 2018 album Mostly in Blue again features his quartet—pianist Keith Saunders, bassist Robb Fisher , and drummer Ron Marabuto—but repositions them both in pursuit of new challenges and, if anything, even more “in blue.”

Cotsirilos added piano to his longtime trio in 2018, hoping to express the denser harmonies he was hearing in his writing. The success of the experiment encouraged him to keep moving forward, creating a group of compositions that are more complex and more seasoned in the blues. (He comes by that seasoning honestly: Though based in the San Francisco Bay Area, Cotsirilos was born and raised in Chicago.)

The lockdowns and isolation of the COVID-19 pandemic gave him opportunities to explore a variety of music and assimilate it into his own work. However, it also hampered his ability to workshop the new tunes with the band. “It became more and more difficult to try out the pieces, so it took a while to get them to a point where we were all happy with them,” Cotsirilos says. “But I was confident … that everything would come together.”

Indeed, come together it did. From the sumptuous melody and harmonies of “Refuge,” to the sly, sexy Latin groove of “Igualmente,” to the alluring intricacies of “Aftermath” and “Let’s Make a Break for It,” Refuge is every inch the work of an adept and highly attuned ensemble. It’s clear that the players are intimately familiar with not just the compositions, but the possibilities they offer.

While Cotsirilos is the album’s leader and composer, the quartet functions very much on a level playing field. The pieces require close interaction among all four musicians—the entirety of “A Faint Light” hinges on the pocket they create—and even the solos achieve their high caliber through the full band’s chemistry. Cotsirilos’s Byzantine line on “Planet Roxoid” succeeds by virtue of Saunders’s anticipating his every step, and the guitarist pays it forward with an equally empathic accompaniment of Fisher’s bass solo on “The Three Doves.”

Cotsirilos claims to receive inspiration from recordings of Beethoven’s cello sonatas—because, he says, they were written with an aim “for instruments to enhance each other.” His work with his quartet on Refuge leaves no doubt that this is so.

George Cotsirilos was born in Chicago in 1951. His passion for music was stimulated by an aunt and an uncle—the former was a classical music lover who encouraged him to play the violin; the latter was an erstwhile drummer who took him to hear Louis Armstrong. The renaissance of Chicago blues during his teenage years ensured that George grew devoted to the electric guitar.

In 1969, Cotsirilos enrolled at UC Berkeley. A sociology major, he briefly left school halfway through his studies to play guitar in a blues band. When he re-enrolled at Berkeley, he separately became a student of Warren Nunes, a legendary guitarist in East Bay musical circles. Nunes brought Cotsirilos under the sway of jazz, learning about the great guitarists as well as the ideas and techniques of other instrumentalists like Miles Davis, John Coltrane, and Chick Corea.

Even as he studied music more seriously—training on classical guitar through the San Francisco Conservatory of Music—Cotsirilos completed his sociology degree, then attained a law degree. He maintained a dual career for years working as a criminal defender and lecturer at Berkeley’s prestigious School of Law, while also performing alongside Pharoah Sanders, Etta James, renowned drummer Eddie Marshall, and Bay Area stalwarts Mel Martin and Mark Levine. He released his first solo album, Silenciosa, in 2003, followed by three trio albums with Fisher and Marabuto.

In 2017, around the same time he expanded his trio to a quartet (with Saunders on piano), Cotsirilos retired from the law profession and devoted himself full-time to music. Refuge is one of the beneficiaries of that decision—and so is the jazz audience.