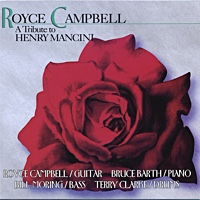 slideshow
One of my favorite albums celebrating the music of Henry Mancini is guitarist Royce Campbell's Tribute to Henry Mancini, recorded in 1996. Royce marvelously captures Mancini's hip and gentle melody lines and his passion for space. Royce should know. He was Mancini's guitarist for 19 years. A year before this album, Royce recorded a solid organ-trio album with organist Melvyn Rhyne and drummer Jimmy Cobb. You don't climb into the proverbial ring with those guys unless you know exactly what you're doing—and Royce did and does.

Now, 24 years later, he has released a second organ trio album (recorded in 2016) called Organ Trio (Moon Cycle), with Jonah Kane-West on organ and Billy Williams Jr. on drums. In addition to being a lovely guitarist, Royce has great taste, as you'll see when you give a listen. There are two standards—Close Your Eyes and The Brothers Go to Mothers from Mancini's Peter Gunn. The rest are groove-rich originals such as Lucky, the pensive Letter to Henry, the swirling Toe the Line, a holiday-flavored That Time of Year and more.

Even on up-tempo blues, such as Organ Trio Blues, and funky tunes like Caribbean Sea, Royce never wheel-spins nor is he ever in a hurry. He's deliberate and sensitive. On this album, Royce gives the organ-trio format the Mancini touch. He swings gently and lets the sound of ringing tones wash over you before releasing another flurry. I could listen to him all day. As for Kane-West (above) and Williams (below), solid organ playing with an equally gentle approach and drums that stir things up without turning them over. Add this album to your fireplace list.