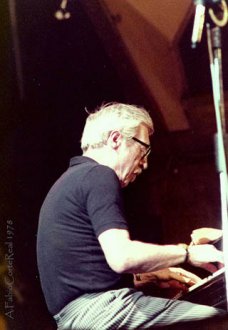 slideshow
Many stories about jazz heroes are apocryphal. This is one is true.

One night in the late 1930s, Fats Waller And His Rhythm were playing at the Yacht Club on 52nd Street in Manhattan. Art Tatum, the other half of the Tatum-Waller mutual admiration society, came in to listen. When he first moved to New York, Tatum’s almost superhuman virtuosity at the piano had bowled over every pianist in town, including Waller. Introducing his friend to the audience, Fats said, “I just play the piano, but God is in the house tonight."

The line became a part of underground jazz lore. Then in 1972, producer Don Schlitten used it as the title of a Xanadu LP of Tatum recordings from the early forties, since reissued as a High Note CD. Tatum influenced virtually every pianist who came of age in the thirties and forties. Through the decades he has inspired or discouraged legions more. Among those who fell under his spell was Jimmy Rowles (1918-1996), who frequently heard Tatum in Los Angeles after Rowles moved there from Spokane in 1940. Tatum had a profound effect on Rowles: the young man determined not to be try to be like Tatum, which would have been impossible, but to find his own way. He did. Jimmy told me that, like nearly everyone else who listened to it, when he heard Tatum’s 1933 recording of “Tea for Two,” he thought it was by two, possibly three pianists.

Jimmy Rowles had an avocational sideline as a sketch artist. His visual art radiated thepiquant view of life that also characterized much of his piano playing. His drawings made their points through suggestion, subtle references, humor. Mostly, he gave them to friends, often as Christmas cards. Anybody who has a Rowles drawing is likely to have it on a wall in a frame. That is what the vibraharpist and Rowles protégé Charlie Shoemake did with Jimmy’s Tatum drawing. Mr. Shoemake has kindly shared it with Rifftides. He gave Rifftides permission to share it with you.