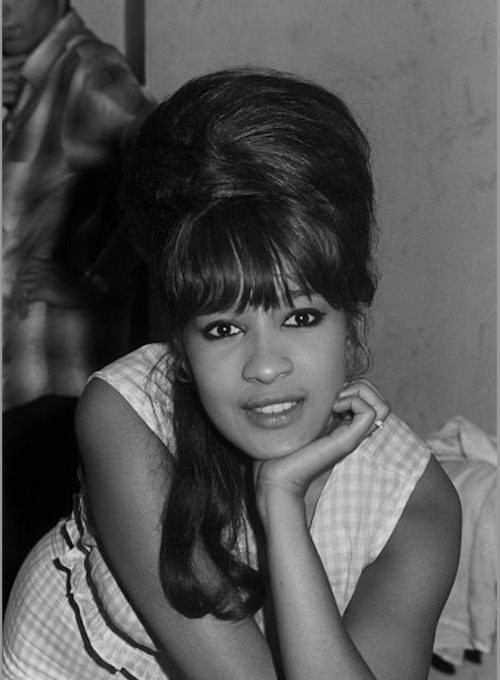 Ronnie Spector, whose quivering, commanding vocals as the lead singer of the Ronettes in the early 1960s touched the hearts of love-struck teens and set new standards for girl groups on records and TV shows, died January 12. She was 78.

With her high, sonorous teenage voice and distinct New York accent, Ronnie, along with the Ronettes, had a way of connecting instantly with young radio listeners, especially in urban markets. Under the guidance of record producer Phil Spector starting in 1963, Ronnie—along with her older sister Estelle Bennett, and their cousin, Nedra Talley—were the beneficiaries of dramatic love songs written by composer duos such as Cynthia Weil and Barry Mann, and Jeff Barry and Ellie Greenwich. From love at first sight to break up and make up, the songs were perfectly cinched to Ronnie's wrenching, love-struck delivery. [Photo of Ronnie Spector at George Washington High School by Winston Vargas, courtesy of Ronnie Spector]

Often mischaracterized as bringing a “bad girl" edge to girl groups, there was nothing bad about them—not the music, the lyrics, their image or their reputations. The Ronettes were of mixed racial backgrounds and their high hair was popular with high-school teens on New York's streets at the time, giving them an exotic look, as Ronnie described it to me in interviews. As for reputations, they were supervised by Ronnie's mother on tours, including in the U.K. in 1963, when the Rolling Stones opened for them.

For the music that backed them, producer Spector often added piano figures and riffs, and called for layers of dense orchestration capped by pounding drums to give the Ronettes' records a crowded, feverish sound. The Ronettes' vocals and Spector's studio musicians, who came to be known as the Wrecking Crew, were a fundamental influence on Brian Wilson and the Beach Boys. Their 1964 hit, Don't Worry Baby, was written by Brian as an answer to the Ronettes' Be My Baby. Enchanted by Ronnie's pleading voice and the group's vocal harmonies, Brian first offered the song to the Ronettes, but it was rejected by Spector.

In the studio, Ronnie had a way of singing those love songs as if she was pounding a bedroom pillow, clasping a framed picture of a new boyfriend or impatiently filing her nails with one eye on her Princess phone awaiting his call. Though the Ronettes had just nine hits on Billboard's pop chart—including Be My Baby, The Best Part of Breaking Up, Do I Love You? and Walking in the Rain—many of the B-sides of those singles were popular on jukeboxes, too, including How Does It Feel?, When I Saw You and Oh I Love You. And then there were singles that didn't make the charts but should have, like I Never Saw the Sunshine, Paradise and Here I Sit.

The trio's vocal sound was an offspring of harmonies by Frankie Lymon and the Teenagers, a much admired mid-'50s vocal group also from Washington Heights that became rock 'n' roll's first hit ensemble to sing about teen issues. Ronnie told me that as pre-teens, she and her relatives sang Teenagers' songs in front of mirrors and in the lobby of their grandmother's building. [Photo above of the Ronettes by Bruno of Hollywood, courtesy of Ronnie Spector]

To be honest, I wrote this appreciation last night choked up. I first heard the Ronettes on my transistor radio in 1964, when I was 8, and fell madly in love with Ronnie. She was the first radio singer who sounded like everyone else in my Washington Heights neighborhood in Manhattan, probably because she also grew up there. But even more, she was the first to deliver songs in a way that helped me understand the impact that love and Beatlemania were having on girls—the anxiety, euphoria and near hysteria. [Photo above of the Ronettes, courtesy of Ronnie Spector]

Over the years, I interviewed Ronnie twice for the Wall Street Journal and at length for a chapter in my new book, Rock Concert: An Oral History. As an interview subject, Ronnie was always animated and one of the sweetest, most congenial music legends, as kind and as forthcoming as you could imagine. In some ways, she retained a teenage view of the world, despite her ordeals after marrying an increasingly neurotic and psychotic Spector, breaking away and pushing on even when the music she had known changed.

In this regard, Ronnie was beloved by late-night talk show hosts, concert-goers that came to see her perform, and artists and bands that had grown up on her music. She also was blessed to marry Jonathan Greenfield in 1982. Jonathan managed Ronnie and took loving care of her. You can read my “House Call" with Ronnie here and my “Playlist" here. You'll have to buy my book to read the chapter interview with Ronnie. [Photo above of, from left, Estelle and Ronnie Bennett, courtesy of Ronnie Spector]

In tribute to Ronnie, here are 10 favorite clips. Love you always, Ronnie...

Here's Walking in the Rain...

Here's Is This What I Get for Loving You?...

And here's Ronnie in concert...