All were well received at a sold out Kaluga Philharmonic Hall. 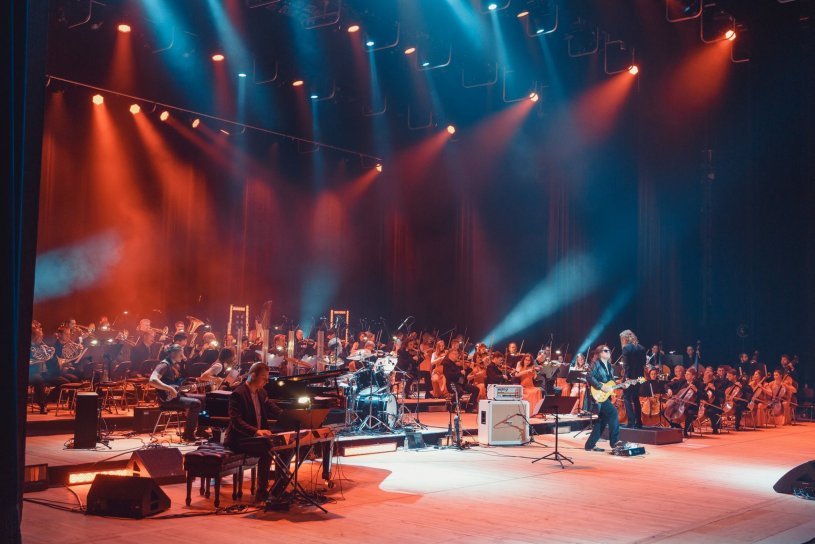 slideshow
The 24th international World Of Guitar music festival took place on May 24-28, 2021 in Kaluga, Russia. This year, during the main portion of the festival, on May 26th took place joint concert of guitar virtuoso Roman Miroshnichenko and his band with outstanding tango nuevo interpreter—Argentinian pianist Mario Parmisano, featuring the 50-piece Moscow City Symphony. “It was a great pleasure to perform again with Roman Miroshnichenko—a great guitarist who has performed with Steve Vai, Larry Coryell and many other world jazz stars"—shared the joy of the joint performance of Mario Parmisano.

The next day, on May 27th, Roman Miroshnichenko with his band presented his album The Sixth Sense. All were well received at a sold out Kaluga Philharmonic Hall.

“This year the festival days were dedicated to the 100th anniversary of the “King" of tango Astor Piazzolla and pioneer of jazz fusion Chick Corea. Astor and Chick — musicians who have shaped modern instrumental music. Both are geniuses," said the festival CEO Roman Miroshnichenko.

Just a few months after the official release, Roman's new work has received worldwide recognition. The album won the silver medal of the Global Music Awards, continues to grow in popularity in Japan, where a wide distribution of a special CDs edition started. One of the new album's compositions “Bodhrán's Magic", feat. American violinist Charlie Bisharat received a nomination for the prestigious Hollywood Music In Media Awards, becoming one of the number of such nominees as Hans Zimmer, Alan Silvestri, Howard Shore, Branford Marsalis, Terence Blanchard and others.

Scott Yanow commented on the release: “When one listens to the powerful guitar playing of Roman Miroschnichenko, it is easy to be reminded of John McLaughlin, Al DiMeola, Paco DeLucia and John McLaughlin during his Mahavishnu days, but it soon becomes apparent that Miroschnichenko has his own sound within fusion, setting the standard for XXI century fusion guitar. While he is never shy to cut loose, he also uses subtlety, mood variations and creativity throughout, mixing together tight arrangements with pure spontaneity. The Sixth Sense is an impressive effort that can be a prized acquisition for the guitarist’s many fans."