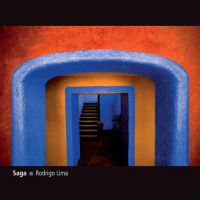 Temperatures dropped to single digits in New York today, compelling me to break out something tasty and warm: Saga, a new double-CD album by Brazilian guitarist and composer-arranger Rodrigo Lima. Produced by Arnaldo DeSouteiro, the album is Lima's first as a leader and a tribute of sorts to CTI's sultry Brazilian jazz recordings of the 1970s, but with contemporary twists. Musical guests include flutist Hubert Laws and arranger Don Sebesky as well as clarinetist Anat Cohen, vibraphonist Mike Maineiri and percussionist Sammy Figueroa. Even the cover is by photographer Pete Turner, whose works adorned the wet-glossy covers of CTI's albums.

Captured on Saga is Brazil's rich tradition of simple, playful melodies matured with a cocktail shaker of intricate and seductive rhythms. Among the gorgeous Lima originals are Flying Waltz, with Laws and Hugo Fattoruso on Fender Rhodes, arranged and conducted by Sebesky. Even more potent—and my favorite track—is the hypnotic Altinho, with Lima arranging and playing a wide range of guitars. There also are two Fender Rhodes—Fattoruso on right speaker and Lulu Martin on the left. The bassist Sergio Barroso, the drummer Cesar Machado and other percussionists lay down a lush underbrush.

As the liners note, Saga features a range of Brazilian rhythms: choro (on Anat’s Song), baião (on Brasileirão), samba (on Samba da Mistura) and bossa nova (on Altinho). There's also a fusion piece (Ânima 2) plus two tunes composed by Hermeto Pascoal. On Palinha Do Vinho, one of Pascoal's works, two ethereal vocalists are heard on two different speaker channels. On the left is Ithamara Koorax and on the right is Aline Morena. [Photo above, from left, of Aline Morena, Ithamara Koorax, Hermeto Pascoal and Rodrigo Lima by Arnaldo DeSouteiro]

On Brahms, Lima and Arnaldo turn  the classical composer's Symphony 3 into a 20:44 classical jazz-samba  fusion work. Porta Aflora is another beautiful original by Lima and Pedro Rocha, with a rich vocal by Lima, who shows off his deep technique on acoustic guitar. Lima and Joao Cavalcanti's Samba da Mistura packs mystery and a swapping of minor and major releases with Frank Herzberg's samba-driven electric bass underneath and Fattoruso on harpsichord, which provides a touch of '60s Rio feel. [Photo above of Hugo Fattoruso, left, and Arnaldo DeSouteiro by Patricia Balaban]