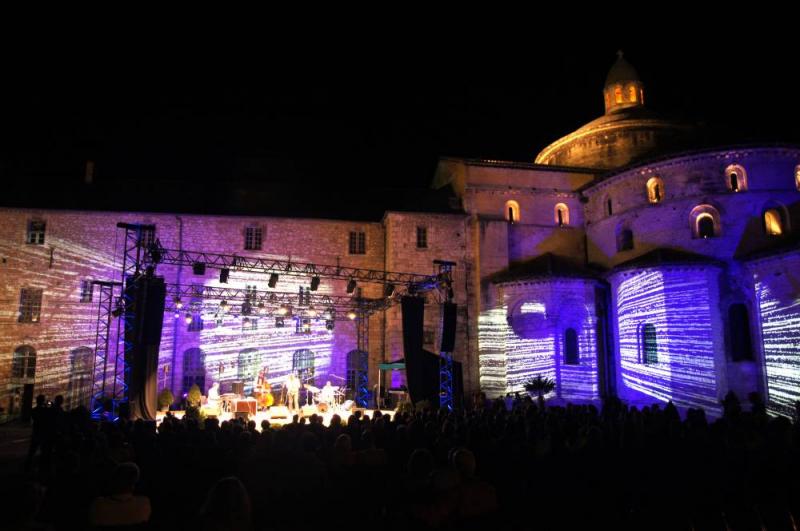 slideshow
The new jazz generation converges with its Afro-American roots this year at the Souillac Jazz Festival in southwest France, to be held from 15 to 21 July.

The Trio d'en bas will stage an entertaining and unusual spectacle in the Grottes de Lacave.

The poet Renaud Garcia-Fons and his five- stringed double bass will cast a spell on the Souillac abbey with his Mediterranean-inspired melodies.

Michel Portal, clarinettist, and Vincent Peirani, accordionist, will offer up a dazzling confrontation of aesthetics, folly and passion.

Cuban pianist Roberto Fonseca (whose CD Yo was ranked No. 1 in the Jazz News 2012 Top Ten) and his sextet will blend Latino-Caribbean tempos with the dance-like frenzy of African music.

Two exhibits: “Jazz, art, rhythm” performances and plastic arts, and “Sim Copans and French jazz”, based on the work of Sim Copans, an American radio jazzman in France and co-founder of the festival.

Music in the streets, on the squares and on café terraces: with local bands, brass bands and New Orleans groups, from Monday 15 to Saturday 20 July.

The Department of the Lot abounds in warm old stones. The festival’s opening concert will take place in the iconic Grottes de Lacave. The illuminated Roman abbey of Souillac will add magic to the four concerts on the place Pierre Betz. Pinsac’s church square, and Souillac’s medieval streets, covered market, belfry and outdoor market will resonate with jazz as the entire town is transformed into a stage.

JAZZ IN ITS LOCAL CONTEXT

The Souillac jazz festival association works closely with several local groups to contribute to the region’s cultural development: the Amis des Sentiers souillagais, for a jazz walk; the local producers’ market, for a jazz dinner; the Amis de l’orgue de l’abbaye Sainte- Marie, for a jazz organ performance; and the local movie theatre, for a screening of a film about jazz (Olivier Taïeb’s Jazzmix in New York).

The Souillac jazz festival, now in its 38th year, is funded by more than 150 local merchants, small businesses and tradespeople; patrons; and the Town of Souillac, the Department of the Lot, the Midi-Pyrénées region and the French Government, in recognition of its key role in local development.