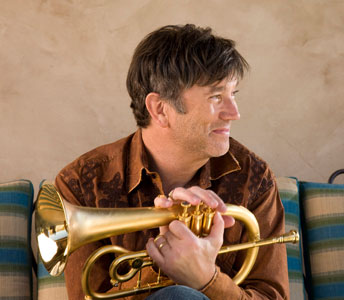 Sherman Oaks, CA: As cool as a winter’s eve, as warm as a holiday dinner with loved ones, and as beautiful as an exquisitely ornamented Christmas tree , Rick Braun’s “Swingin’ In The Snow” is a celebration of “the most wonderful time of the year” featuring some of the contemporary jazz star’s talented friends. Braun produced the elegant 11-song set that will be released by Brauntosoarus Music on October 16th. The merry band of musical elves who joined the trumpeter-vocalist in his workshop include Mindi Abair, David Benoit, Gregg Karukas, Dave Koz, Philippe Saisse, Kirk Whalum, Peter White, a string quartet and a gospel choir led by R&B crooner Jeffrey Osborne. Braun will donate one dollar from each album sale to the Autism Society of America.

“Since I was a kid, I spent every Christmas enjoying classic holiday recordings by artists like Bing Crosby, Nat King Cole, Frank Sinatra, and Ella Fitzgerald, which inspired ‘Swingin' In The Snow.’ I had a blast recording these great tunes and am honored that so many of my dearest friends, who happen to be incredible musicians, shared their talent with me to create this wonderful project. This is real music being played by real musicians and my hope is that you will enjoy listening to us as much as we enjoyed making the record,” said Braun, who will again be touring this holiday season as part of A Peter White Christmas with White and Abair, an 18-city U.S. trek that begins the day after Thanksgiving (November 23) in Austin, Texas and concludes December 22nd in San Diego.

Counting off with a dose of big band bombast, the album opens in full swing on “I’ve Got My Love To Keep Me Warm.” Wide-eyed with excitement, “It’s The Most Wonderful Time Of The Year” is as enchanting as ever. The flugelhorn and piano intro for “Oh Tannenbaum” adds a moment of seasonal solemnity before a pitter patter beat sets the stage for Braun’s suave and sophisticated vocals and a children’s chorus. Braun and Abair’s charming voices flirtingly frolic on “Baby Its Cold Outside.” Saisse crafted a traditional arrangement for “The Christmas Song” whereas Braun and White’s fresh take on “Sleigh Ride” is a cheerful acoustic guitar and percussion powered jaunt. Braun bewitches on “Have Yourself A Merry Little Christmas” with an assist from an embracing Koz sax solo. The Allentown, Pennsylvania native gives a shout out to his home state on “No Place Like Home For The Holidays” followed by a mesmerizing rendition of “I’ll Be Home For Christmas.” In an imaginative tribute to The Drifters, “White Christmas” becomes a finger-popping doo-wop number. “Silent Night” is beatified by a celestial choir and inspired offerings from Braun’s flugelhorn and Whalum’s sax.

Stylistically, “Swingin’ In The Snow” is a continuation of Braun’s mid-career reinvention that began with last year’s “Sings With Strings” disc. After 18 years as an instrumentalist who repeatedly topped the contemporary jazz albums and singles charts both as a recording artist and as an in demand producer, songwriter and featured guest musician, the suburban Los Angeles resident realized a dream by stepping up to the microphone to sing standards. Although he sung backup for Rod Stewart, Sade and others earlier in his career, the horn man had never sung before as a frontman on a gorgeously orchestrated project. His consistently growing catalogue of radio hits and years of performing on the concert stage has made Braun an enduring fan favorite.