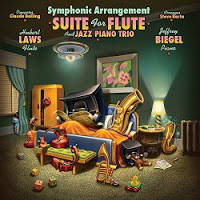 slideshow
Forty years ago, pianist Claude Bolling shook up the jazz and classical music worlds a bit with his Suite for Flute and Jazz Piano Trio recording with flutist Jean-Pierre Rampal. It was one of the first true crossover recordings between the two musical styles. The public loved it—since it spent 530 weeks (more than 10 years) on Billboard’s classical charts after rapidly topping out at #1.   Fast forward from 1975 to 2015. With Bolling’s blessing – and an admonition not to tinker with the score, American arranger Steve Barta recast the original as a symphonic arrangement featuring the jazz quartet (flute plus rhythm section), string quartet and orchestra. This new version features pianist Jeffrey Biegel and jazz flute master Hubert Laws.

The added cushion of strings and brass wraps the project in a fine cocoon, celebrating the original melody and accentuating the dynamics of its mixed moods. Without offering a mere repertory revisit to the original, Barta, Biegel and Laws have updated Bolling’s suite beautifully.

For this self-produced recording, Barta also enlisted Bolling’s original artist/designer, Roger Huyssen, to update the original whimsical cover design, which featured the flute and piano sharing sleeping quarters. On the new version, the pair is still in bed, but surrounded by eight instrumental children.

Such a lavish tip of the hat by Barta & Co. was richly deserved and then some. Bolling’s 1975 piece can be credited for inspiring many fine jazz-classical crossover efforts through the years. They include pianist Donal Fox’s Scarlatti Jazz Suite Project, and the Burgstaller Martignon 4’s Mozart’s Blue Dreams and Other Crossover Fantasies and Bach’s Secret Files and More Crossover Fantasies projects.

The Symphonic Arrangement of Suite for Flute and Jazz Piano Trio will have its live performance premiere on November 20-21 at the Madison Theatre at Molloy College in Rockville Centre NY. Biegel and Laws will perform with Long Island’s South Shore Symphony at those evening concerts.