My intention is for this new incarnation of The Lodge to embody the same spirit as the original, eschewing the inane egoism characteristic of much contemporary ‘music journalism,’ while reveling in instances of creative transcendence and counting on serendipity to help provide substantive content. —Barry Cleveland 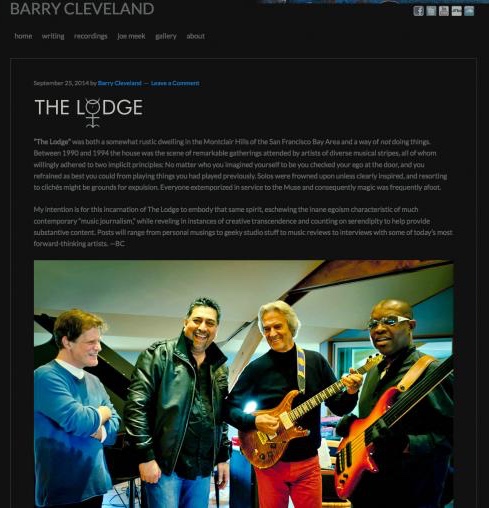 Cleveland reviews new releases by John McLaughlin, Ben Monder, Sonar, Orion Tango, and Kevin Kastning in his latest post, all of which include audio examples. Cleveland’s debut feature interview is with iconoclastic guitarists Mark Wingfield and Kevin Kastning. who discuss their singular approaches to their instruments, the nature of creativity, “composing in the moment,” and much more. Next up is an extended interview with visionary guitarist, composer, and technical innovator David Torn.

“The Lodge was a dwelling in the Montclair Hills of the San Francisco Bay Area,” explains Cleveland. “Between 1990 and 1994 it was the scene of remarkable gatherings attended by artists of diverse musical stripes, all of whom willingly adhered to two implicit principles: No matter who you imagined yourself to be you checked your ego at the door, and you refrained as best you could from playing things you had played previously. Resorting to clichés might be grounds for expulsion.

“My intention is for this new incarnation of The Lodge to embody that same spirit, eschewing the inane egoism characteristic of much contemporary ‘music journalism,’ while reveling in instances of creative transcendence and counting on serendipity to help provide substantive content.”

Barry Cleveland is a San Francisco Bay Area-based journalist, author, guitarist, and composer. He was an editor at Guitar Player magazine for 12 years and at Mix and Electronic Musician magazines previous to that. His book, Joe Meek's Bold Techniques is a cult classic, and he also contributed to Whole Lotta Led Zeppelin. He has released five albums, as well as composing music for film and television.