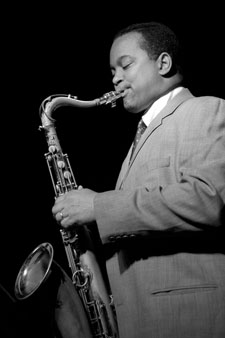 Saxophonist and clarinetist Victor Goines has been a key planet in the orbit of Wynton Marsalis for more than a decade. He played on the seminal Marsalis album Live At The Village Vanguard (Columbia, 1999) within a week of joining the band, and he's continued to appear with Marsalis and with the Jazz at Lincoln Center Orchestra ever since. Goines recorded New Adventures (Criss Cross, 2006) in 2005.

All About Jazz contributor Jason Crane talked with Goines in the spring of 2007 about New Adventures, his years on the road, and exactly how many times you have to have played the bass clarinet to get Wynton Marsalis to hire you.

Check out Victor Goines: Liquid and Fire at AAJ today!