The pianist's writing and versatility come across like line drawings which break a solid page of text in a publication. Thematic links to Thelonious Monk's crooked time sense (especially on 'Now and Forever') and Herbie Nichols' joyous abandon (more pointedly on 'Get it?'), allow Carlberg to create a space where bop, cool and free impulses intersect. --Ken Waxman, The Whole Note (on Carlberg's Cosmopolitan Greetings) 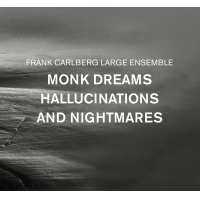 “Frank Carlberg is pushing boundaries and we will be watching closely,"—Steve Williams, UKVibe

Monk Dreams, Hallucinations And Nightmares, the new large ensemble recording from Frank Carlberg (on Red Piano Records, February 10, 2017), draws its inspiration from the work of Thelonious Monk. The album taps into the atmosphere and orbit of Monk; infected by, informed by, in awe of Monk, and presented as an act of love and respect. The pieces generate their shapes from splinters, cells and feelings found in and around Monk's music, as well as from his verbal utterances in the form of advice and/or cryptic observations. Monk Dreams, Hallucinations And Nightmares is not intended as a tribute album, but rather as, “a celebration of the beauty and vitality of his music that has impacted me profoundly," explained Frank Carlberg. “I thought it fitting to present this recording during the Monk Centennial year, 2017."

Why Monk? Carlberg explains: “For me, a Monk-inspired project is quite personal. Monk's music has been central to my musical life from very early on. The clarity of his thought, the uncompromising nature of his art, the emotional impact Monk's music has made on me; this recording is a culmination of all these elements, and being able to record this music with these remarkable musicians is really a dream come true for me!"

The opener, “Dry Bean Stew", borrows shapes and snippets from Monk's, “I Mean You". It begins with mysteriously pulsating sounds and noises that gradually develop into a restless rhythm, alternating between longer and shorter beats. This tempo with an irregular gait meets up with a descending motif that echoes “I Mean You." After several shifts the pulse slows to half-time and features resonant wind voicings. Suddenly the metrically unsettled tempo returns with cascading figures in counterpoint hurtling towards a blistering solo by John O'Gallagher on alto. The end of O'Gallagher's solo leads back to the half-time feel and a piano excursion by Carlberg. The band's swinging statement then concludes with a transition to a tutti rhythmic romp serving as a back drop to trumpeter John Carlson's soaring, emotive lines. A long ascending line is followed by the cascading horn lines, with increased counterpoint, before the band delivers one more short statement in half-time. A humorous wink to the classic Monk intro ends the piece on a light note.

“Rhymes" features a lyrical a cappella bass solo by Weidenmüller as an introduction. Once the band enters, Clark Coolidge's evocative poem, “Rhymes with Monk" (read here by poet Paul Lichter), permeates the whole piece. The band commentary features brief solo spots by Jeremy Udden on alto saxophone, and David Smith on trumpet, as well as many allusions to Monk-like shapes by the horn sections.

“Sphere" is an energetic romp centered around the pitch of Bb. Washburne's trombone sets the tone before the horns gradually enter in playful rhythmic counterpoint with occasional interruptions. A hint of “Straight No Chaser" enters the fray but disappears just as quickly. After a metric modulation and some tonal shifts Udden's alto takes over with a lyrical disposition. The horns re-enter and build to a climax of organized chaos. After a brief tempo change Washburne and the simmering rhythm section bring the tune to a playful ending.

After some bird-like textures on “A DARKER SHADE OF LIGHT BLUE" the melancholic melody enters gradually bringing the whole band together in a short tutti statement. Brian Landrus takes over with a yearning bass clarinet solo supported by bass and drums. Clustered voicings provide a backdrop to the solo. A tempo is established with Sarin setting the stage for a bass line with bass trombone and bass clarinet. Carlson solos with gusto on trumpet and a lively sectional counterpoint leads to a rambunctious finale that quickly dissipates into silence.

“Beast," with its distant echoes of Monk's “Ugly Beauty" evokes a somber merry-go-round atmosphere. Alan Ferber's trombone is featured to great effect, building the intensity before the re-entry of the thematic material.

“You Dig!" is a lively verbal Monk quote, sung by Christine Correa. The music rushes forward with reckless abandon, and after breathless woodwinds and relentless brass, O'Gallagher matches the intensity in his brilliant alto solo. After the band returns, drummer Michael Sarin has the spotlight and dispatches a delightfully inventive solo turn before a last humorous slow reiteration of the text.

“No Fear, My Dear" opens with stately low winds and bass providing the environment for Sarin's percussive ruminations. After a gradual orchestral build Adam Kolker's tenor plays a beautifully crafted call and response solo with the band. Eventually, the ensemble takes over and borrows some phrases of “Ruby, My Dear" in rich orchestration. An open wind pyramid of perfect fifths brings the piece to a close.

The motivic and harmonic materials of “International Man Of Mystery" are mostly derived from the interval of a sixth (the interval also structurally significant in Monk's “Misterioso"). Udden provides solo commentary to the orchestral setting before giving way to a Frank Carlberg piano solo. The cornet of Kirk Knuffke then builds to the orchestral high point of the piece. A few more sixths in mixed winds end the piece in a ritardando.

Another Monk quote provides the text for the setting in “Always Night." Trumpeter Carlson blows over a churning rhythm section background before Correa enters with the short declamatory yet mysterious vocal line. After some instrumental interruptions the line re-appears twice more. The piece ends with a collective improvisation where Correa and Carlson lead the way.

Thelonious Monk's classic “Round About Midnight" gets an extended, creative treatment here. Carlberg says: “I wanted to include this piece here in all its glory. Being probably Monk's most famous composition (and most frequently recorded...) I wanted to honor the exquisite design of the piece while adding a personal take on it. I also wanted to incorporate a hint of the traditional intro as well as coda with a certain compositional transformation of the original." Knuffke is the featured soloist throughout and turns in an exquisite performance on cornet. The band is richly orchestrated and brilliantly performs the dynamics from a hush to a roar.

Monk Dreams, Hallucinations And Nightmares is not your grandfather's Big Band music. Specifically, it offers new perspectives on Monk's music, and on compositions for large jazz ensemble in general. It celebrates Thelonious Monk on his centennial while forging new paths in modern jazz by balancing the improvisational impulses with exciting orchestral and structural designs.