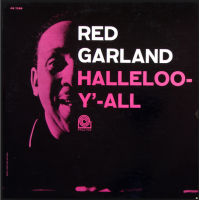 slideshow
Except for Count Basie, few pianists in the post-war years could swing the blues like Red Garland. Certainly, Garland could give standards a handsome spin with dramatic lyricism, plenty of space and clusters of block chords. But the blues were in Garland's blood system, and his trio album Halleloo-Y'-All from 1960 remains for me one of the finest examples of his blues trio playing.

Garland grew up in Dallas, began his music education on reed instruments, joined the Army in 1941and began playing piano while stationed in Arizona. After being discharged from the service in '44, Garland gigged around Texas and soon joined Oran “Hot Lips" Page's orchestra. When the band hit New York, Garland quit to remain in the city, which turned out to be a shrewd career move.

In New York, Garland played and recorded with many of the greats of the late 1940s. When Miles Davis was unable to persuade Ahmad Jamal and his trio to back him in the early 1950s, Davis turned to Garland, looking to the pianist for an emulation of Jamal's elegant and bright melodic style. Garland delivered (in comes cases on the exact same songs) but with a more pronounced and bluesy style than Jamal. By 1956, Prestige was recording Garland as the leader of a trio when he wasn't playing as a member of Davis's and John Coltrane's rhythm sections. [Photo above of Red Garland and Miles Davis]

Virtually all of Garland's leadership dates had a blues pull. Like a posh musical bartender, Garland was masterful at perfectly blending church and club to produce music that was neither and both. Like B.B. King and Ray Charles, every song Garland touched was saturated in the blues.