The virtuoso tuba player leads his quartet through a set of his freewheeling originals, playing with remarkable fluency as the lead instrument. 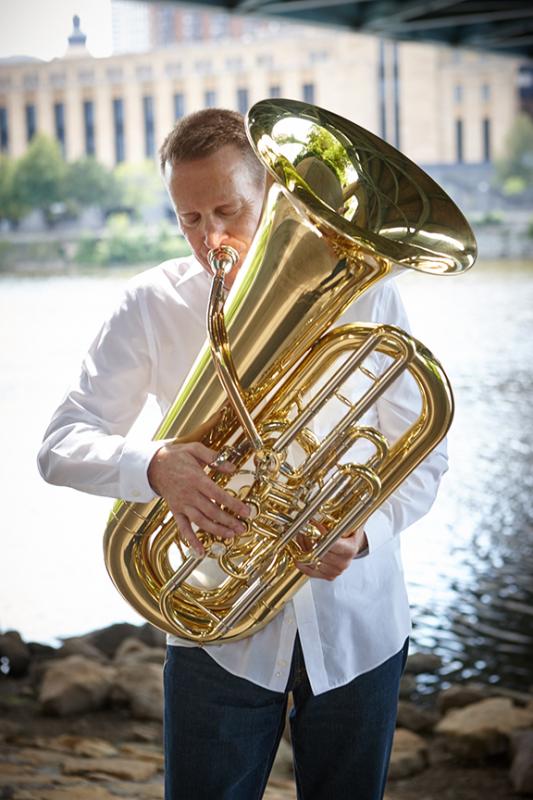 slideshow
Ralph Hepola’s Tuba carves out a place for the much-maligned horn in modern jazz.

The virtuoso tuba player leads his quartet through a set of his freewheeling originals, playing with remarkable fluency as the lead instrument.

While the tuba has often been stereotyped as a limited instrument that keeps time in marching bands, Dixieland and polka groups, Ralph Hepola on Tuba makes a strong case for his horn being the lead voice in a modern jazz combo. A brilliant player with extensive experience playing classical music, Hepola is also a creative improvising musician who has little difficulty swinging his large instrument.

Tuba has Hepola in the role often reserved for a trumpet or saxophone, heading a quartet with Peter Shu or Mark Asche on piano and electric keyboards, bassist Daniel Arlig, and drummer David Stanoch, with two guest appearances by guitarist Peter Lothringer. The group performs a set mostly comprised of the tubist’s inventive and diverse originals.

On “Roots And Wings”, Hepola interacts with the lightly funky rhythms played by his sidemen. “Clarion Call” (which uses the same chord changes as Kenny Dorham’s “Blue Bossa”) features the leader swinging with the group. He plays some impressively fast runs on “Hepmobile,” hints at the theme from the “Summer of ‘42” on his warm ballad “Blue Moment,” and sounds quite comfortable and natural playing bebop on “Phraseology”.

Hepola also plays the blues on the swinging “Ralph’s Riff” and the lowdown “Incoming Blues,” introduces colorful originals in “Through The Wringer” and the catchy “American Landscape”, and for a change of pace performs three traditional Celtic melodies (“Black-Eyed Susan”, “Scottish Lullaby” and “Mary, Young and Fair”) that are not normally showcases for the tuba.

Ralph Hepolawas born in St. Paul, Minnesota, studied piano, and switched to the tuba when he was twelve. While in high school he worked with the Minnesota Orchestra and after graduation he won a position with the United States Army Band of Washington, D.C. After earning his music degree at Northwestern University, Hepola worked with the Basel Symphony Orchestra in Switzerland for five years, performed in the Vienna Philharmonic, and was featured as a soloist on Swiss Radio. He freelanced in New York City with a variety of jazz and classical ensembles before resettling in Minnesota.

In his career thus far, Ralph Hepola has appeared on over forty recordings and twenty-five video productions, performed for national tours of Broadway shows, and led two major groups: Route 3 (described as an American musical journey) and HepTones which performs music ranging from classics to contemporary jazz.

With the release of Tuba, Ralph Hepola shows that not only is his instrument worthy of being a lead voice in jazz, but that he is one of the finest tuba players on the scene today.