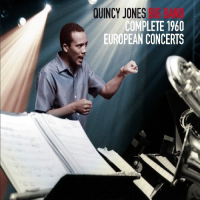 slideshow
In 1957, Quincy Jones moved to Paris. There, he studied with Nadia Boulanger, a French composer who educated numerous expatiate American composers and bandleaders. As Boulanger told Jones, “Your music can never be more or less than you are as a human being." To pay the bills, Jones took a job with Barclay, the French record label, where he produced and arranged sessions for French pop singers and touring American jazz vocalists.

After 19 months, Jones returned to New York. Producer John Hammond asked him to put together a big band for Harold Arlen's blues musical, Free and Easy. The goal was to have the band break in the show in Paris before opening on Broadway. The show opened in the French capital in December 1959 but closed in February 1960.

On March 5, 1960, the Quincy Jones Big Band performed at the Alhambra in Paris, where they were taped for French TV.