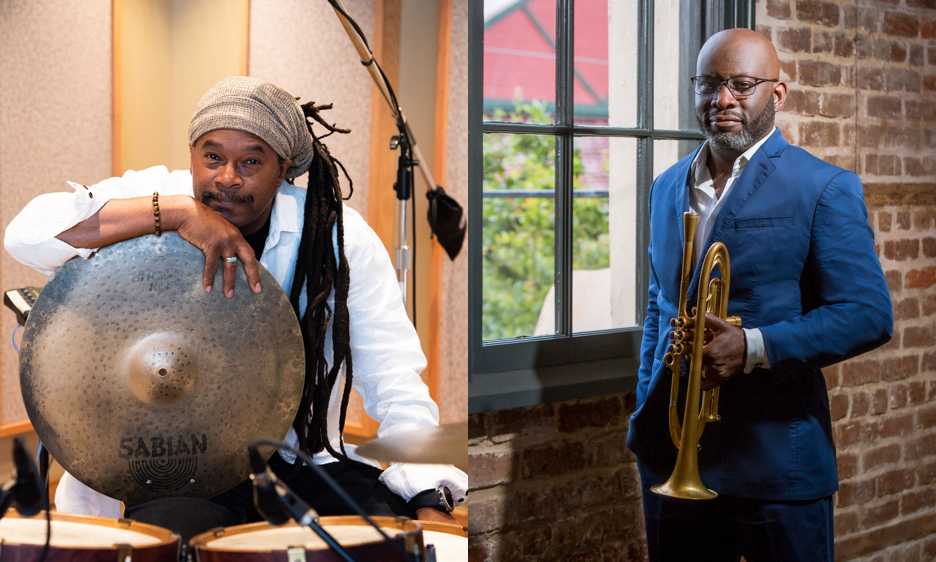 Within two hours [of meeting], we determined that we were brothers.
&#151Charlton Singleton 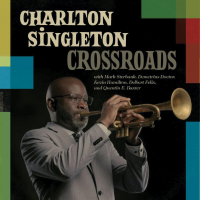 Friends, bandmates, and fellow members of the Gullah cultural community Quentin E. Baxter and Charlton Singleton enrich their relationship yet further with the tandem August 12 release of their albums—Baxter’s Art Moves Jazz and Singleton’s Crossroads—on Baxter’s own BME/Baxter Music Enterprises. Two-fifths of the Grammy-winning Gullah music ensemble Ranky Tanky, drummer Baxter and trumpeter Singleton each also plays a prominent supporting role on the other’s record, with Baxter as the producer of both.

Friends for nearly 30 years, Baxter and Singleton’s musical collaboration began on the jazz scene in their native Charleston, South Carolina (first as a duo, then in the popular local quartet Gradual Lean). They also found common ground in South Carolina’s Gullah culture, in which they both have roots. While that was the direction in which they ultimately found success in Ranky Tanky, they never lost touch with the jazz spark that had brought them together.

“His playing reminded me of church,” Singleton (music and choir director of Charleston’s St. Patrick Catholic Church) says admiringly of the drummer. The admiration is mutual: “Musically, Charlton is just so dependable,” Baxter says.

The albums make clear their exceptional abilities (separately and together). On Art Moves Jazz—Baxter’s leadership debut—the drummer extends his exploration of traditional Gullah music, stamping perceptively played jazz standards like Jimmy Heath’s “For Minors Only” and Thelonious Monk’s “In Walked Bud” with its rhythms. Singleton’s Crossroads (his fifth album) skews more toward bebop-based jazz, even as it comprises eight shrewd original compositions ranging from the propulsive swinger “On the Avenue” to the nostalgic ballad “Nett and Root.”

In each case, however, the leader finds a sympathetic partner in his associate. Whether it’s Baxter underlining Singleton’s music with his surefooted rhythm, or Singleton seasoning Baxter’s folk-dance milieu with his pungent tone, both draw deeply from the same cultural wellsprings of jazz, gospel, and Gullah traditions, extensions of the Black heritage of the American South.

Or, as Baxter more concisely puts it, “That stuff we played was swinging!”

Charlton Singleton was born January 7, 1971. Quentin E. Baxter was born April 28, 1971. Both were born in Charleston, South Carolina; both showed an early aptitude for music; and both had profound family connections to the region’s Gullah community—an African American enclave that forged a distinctive culture out of their African traditions and shared experience in slavery.

Despite these coincidences, however, trumpeter Singleton and drummer Baxter didn’t know each other until the mid-1990s, when they (along with bassist Kevin Hamilton, another longtime friend and colleague) met at the Charleston record store where Singleton worked. Later that evening, he and Baxter got to know each other and were astounded by all they had in common. “Within two hours,” Singleton recalls, “we determined that we were brothers.”

Soon they were also roommates, not to mention collaborators. Baxter and Singleton—along with Hamilton and guitarist Clay Ross—formed the jazz quartet Gradual Lean, which quickly came to be regarded as a linchpin of the Charleston jazz scene. However, Gradual Lean dissolved around the turn of the 21st century when its members turned to other pursuits. Baxter toured with such luminaries as Rene Marie, Monty Alexander, and Freddy Cole, also honing his chops as a producer; Singleton became an educator and continued developing the local jazz scene as the founder and director of the Charleston Jazz Orchestra.

In 2016, however, the duo, along with the other two members of Gradual Lean and vocalist Quiana Parler, reinvented themselves as Ranky Tanky, a jazz-and soul-infused combo whose assay was the Gullah musical tradition that Baxter, Hamilton, and Singleton had known from birth. They garnered considerable acclaim (and the number 1 spot on the Billboard jazz chart) with their self-titled 2017 album. Then they outdid themselves with the 2019 follow-up, Good Time, winning a Grammy Award for Best Regional Roots Music album.

All throughout, both men have cultivated accomplished solo careers. As he became a beacon of Charleston jazz, Singleton also recorded four albums under his own name. While he didn’t lead a record himself, Baxter co-led and produced three with poet and electronic musician Marcus Amaker. Their work together on Baxter’s Art Moves Jazz and Singleton’s Crossroads reveals significant new depths in each individual, and in the creative relationship they’ve fostered over three decades.