Queen of Soul Brings Down the House 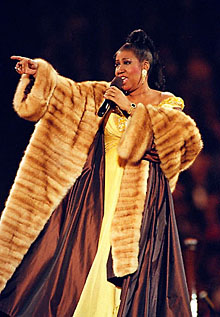 The Queen of Soul had the joint jumping. Leslie Uggams channeled Lena Horne to deliver a rousing “Stormy Weather." And emcee Jamie Foxx never stopped urging everyone to “Let it go" and get excited.

Harlem's Apollo Theater spring benefit inducted Aretha Franklin and Michael Jackson (posthumously) as Hall of Fame legends on Monday night, while Jennifer Lopez and Marc Anthony, fresh from Sunday's duties leading the Puerto Rican Day parade, were honored with the Ruby Dee & Ossie Davis Arts and Humanitarian Award for their Maribel foundation. The benefit raised $1.1 million for the Apollo, which celebrates its 75th anniversary this year.

Angela Bassett introduced Uggams' tribute to Horne. Foxx mimicked Mo'Nique's “Precious" monologue and riffed on “Lethal Weapon" for his “Dreamgirls" castmate Danny Glover. “Many are called but the chosen are few," Glover said in presenting Franklin's plaque after Sharon Jones sang “Do Right Woman" and Estelle crooned “Daydreaming (and Thinking of You)."

Franklin, marveling how she was back on the stage where “they worked me so hard," recalled how it was at the Apollo that Redd Foxx “taught me how to proper curtsy, and I've been curtsying ever since." Franklin acknowledged two Al's in the audience, “Today's" Al Roker and the Rev. Al Sharpton, and Chris Tucker, who was seated in her box and accepted Jackson's honor. She then proceeded to a quick musical workout of her own with “Rock Steady." As she left the stage, Foxx promised, “I'm gonna find you tonight."