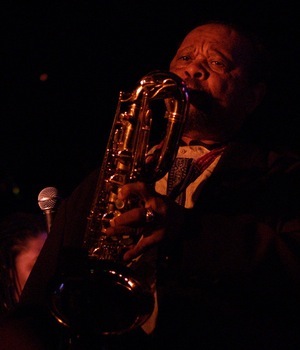 Flirtations with major labels are an infrequent occurrence for most free jazz musicians. For Prince Lasha the call came during a European sojourn in the mid-60s. Lasha assembled a crew of ten musicians in a UK studio, mixing and matching them on a standards-weighted program of six tunes. Fielding plastic alto like his old pal Ornette along with wooden flute he tailored each to his designs and came up with an album that still stands out in discography checkered by lengthy lapses in recording. David Snell's guitar-like harp and the use of two bassists in tandem along with a modest brass section of trumpet and trombone pulls the instrumentation out of the quotidian. Les Tompkins liners, reproduced in the booklet, give detailed play-by-play as well as the basic particulars behind the session's inception. Lifted from a pristine vinyl copy, the fidelity is clean and crisp.

Dusty Groove's decision to dust off the session and reissue it on their cd boutique label makes perfect sense. The platter is right in line with the rare but righteous criteria that the other discs in the catalog subscribe to. Lasha's take on the standards leans heavily to the “inside," but he still injects passages of New Thing brio and fire, especially on the dedicatory original “Impressions of Eric Dolphy" with a spate of intervallic chirrups. British pianist Stan Tracey and fellow expatriate Joe Oliver raise the bar a notch, the latter man bringing playful Monkisms to his work on the riff-driven opener “Nuttin' Out Jones" and elsewhere. Of the standards, “Everything Happens to Me" is the standout and a piece that prognosticates some of the travails Lasha had ahead of him in the coming decades. “Body and Soul," rendered on lilting flute, is a close second with solid supporting work from the brass.

As is so often the case in major label meets outre artist, the CBS session ended up a one-shot and Lasha once again slid into obscurity in its wake. Numerous ups and downs followed in subsequent years before he found a partial late-career renaissance on the CIMP imprint in the company of Odean Pope. The renascence proved short-lived with his passing in December of 2008. This classic set is something a lost-and-found gem and a true pleasure from start to finish. As strong as his early Firebirds sets with Sonny Simmons for Contemporary are, in terms of instrumental variety and “outside-turns-inside" appeal this formerly hen's-teeth rare platter just might have the appreciable edge.