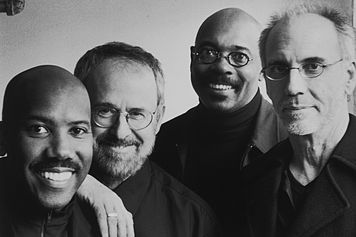 slideshow
During the final moments of their early set at the Blue Note on Monday night, the members of Fourplay engaged in a bit of musical horseplay.

First Bob James, the keyboardist, tossed off a pithy phrase. Nathan East, the bassist, picked it up, followed in turn by the guitarist Larry Carlton and the drummer Harvey Mason. The cycle repeated and quickened until the band was frantically circulating just one note, like a hot potato.

It was cute. But then cuteness has always been a reliable strategy for Fourplay, one of the leading brands in adult-contemporary music. Since 1990 the group has kept refining a bright and palatable sound, mixing chirpy melody with crisp rhythm, and R&B (by loose definition) with modern jazz (by an even looser one). Its consistency applies equally to the commercial side of the equation: almost all the bands 10 albums have landed on the Billboard 200, including Energy (Heads Up), the most recent, released last year.

Mondays set, which kicked off a four-night run, featured songs from that album alongside more established staples of the Fourplay catalog, and the only truly noticeable difference among them involved the relative enthusiasm of the crowd. Chant, a trademark single from the 1990s, was a suave opener, with Mr. Easts wordless singing (and, more cutely, whistling) set against a slow funk shuffle. Ultralight, a more buoyant tune from the new album, came next, and it was embraced by the audience a bit more tentatively at first.