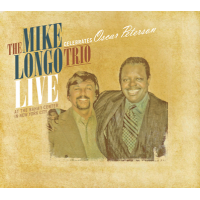 Pianist Mike Longo had the distinct privilege of studying, for six intense months in 1961, with his idol Oscar Peterson in Toronto. Among several key principles imparted by Peterson to his pupil was the importance of “not playing like anyone but yourself,” says Longo. “He told me that people who are trying to play like Art Tatum are making a big mistake in that they are trying to be Art Tatum instead of trying to be as good as Art Tatum. ‘So don’t make the mistake of trying to play like me, Mike.’”

Longo enjoyed a 27-year association with Dizzy Gillespie, one of Peterson’s major musical influences and one of Longo’s as well. He held down the piano chair in Gillespie’s quintet from 1966 to 1973 (following Kenny Barron) and became Dizzy’s music director, composer, arranger, and devoted blood brother, continuing to work with the man long after going out on his own.

By the time he’d joined Gillespie, Longo pretty much had the entire history of jazz and related idioms at his fingertips. Born in Cincinnati in 1939, he taught himself to play boogie-woogie at three. As a teenager in Fort Lauderdale, where the family had moved when he was in the third grade, he spent a year playing gospel piano at a black Baptist church. After earning a bachelor’s degree in classical piano at Western Kentucky University, in 1959, Longo spent two years touring with the Salt City Six, the Dixieland group, and was hired at the Metropole Café in New York as one of the club’s house pianists. In his two shifts a day, he backed Coleman Hawkins, Gene Krupa, and Henry “Red” Allen, among many others.

Gillespie, who first heard the young pianist at the Metropole, hired him in 1966. Longo went on to make nine albums with the trumpet legend, beginning with Swing Low, Sweet Cadillac in 1967, and has also recorded with Astrud Gilberto, Lee Konitz, Buddy Rich, and Moody, to name just a few. He cut the first album under his own name, A Jazz Portrait of Funny Girl, in 1962, and has since done two dozen more. The last 18 have appeared on CAP, a musicians’ cooperative label managed by Longo and his wife. The catalog now boasts some 150 releases, with four volumes of Gillespie at Ronnie Scott’s London club in 1973 due out shortly.

Since January 6, 2004, the anniversary of Gillespie’s death, Longo has presented concerts every Tuesday evening in the Gillespie Auditorium of the New York City Baha’i Center, where his new CD was recorded. He has booked such jazz greats as Charli Persip, Benny Powell, and Annie Ross and appears regularly with his own three groups: the Mike Longo Trio, the 17-piece New York State of the Art Jazz Ensemble (with four CAP CDs to its credit and 160 of his own charts in the band book), and the six-member Mike Longo Funk Band (playing material from the pianist’s three highly collectable fusion albums for the Mainstream, Groove Merchant, and Pablo labels in the ’70s). He also has enjoyed a successful second career as an educator and creator of instructional books and videos.

“One of the most important things I’ve learned was discovering the place inside you where real music comes from,” says Longo. “You don’t really compose something, you uncover it. Dizzy used to say music is out there, waiting for someone to come get it.”