SOURCE: ALL ABOUT JAZZ
December 18, 2007
Sign in to view read count 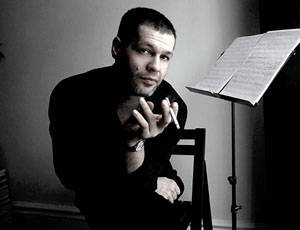 One of the most creative new musicians on the New York City scene, Lucian Ban is a Transylvanian pianist and composer whose collaborations with fellow NYC jazzers continue to produce a burgeoning collection of original music. Recordings with Bob Stewart, Alex Harding, and Jorge Sylvester highlight Lucian's prodigious recent output, a body of work that includes five releases in the last five years.

After studying composition at the Bucharest Music Academy from 1992 to 1995, Ban formed his first stable quartet, Jazz Unit. This band afforded him an opportunity to write, arrange and record two discs, including a live release at Green Hours, the capital's premier jazz club. New compositions, new recordings and a willingness to further his jazz education prompted a move to NYC in 1999 to study at the New School. A 2002 duet with baritone saxophonist Alex Harding produced the well-received disc Somethin' Holy (CIMP Records) and marked the pianist's American recording debut.

Since then, Ban's collaborative thumbprint has been wide-ranging, including membership in the Tuba Project quintet featuring Bob Stewart, Alex Harding's Blutopia band, Hieroglyphics with drummer Barry Altschul, and the Asymmetry quartet with alto saxophonist Jorge Sylvester. Yet, if a common characteristic of Ban's music exists, it may be the blending of modern jazz improvisation with traditional Transylvanian folk rhythms and melodies. It's a sound he brings home twice a year, touring Romania with a stable of American jazz compatriots like soprano saxophonist Sam Newsome who, with Ban, recently co-composed, arranged and performed a jazz suite based on Romanian folk music.

AAJ Contributor Jason West spoke with Ban about his musical upbringing and the diversity of projects with which he's currently involved, as well as his future plans.