Pianist Kerry Politzer Expands into the Singer-Songwriter Realm with 4th Album, "You Took Me In" 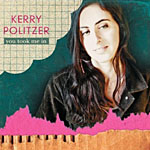 For years, pianist Kerry Politzer's soothing voice has been hidden behind ivory keys. Previously, she released several instrumental jazz albums, but it wasn't until she participated in a Songwriter's Hall of Fame songwriting workshop that she discovered a new level of creative release from her music. In the workshop environment criticism is easy to come by, but Kerry's talent as a songsmith quickly turned a circle of aspiring musicians into encouraging fans. Now, her latest album, You Took Me In, serves as the next step in Kerry's evolution from classical pianist to jazz-driven singer/songwriter. Coincidentally, the album's title stems from a song about her husband, George Colligan - who is a fellow musician and accompanies her in much of her work - that was developed in the aforementioned workshop.

As she completed the final notes, it was all but certain that the 11-year old playing the Bach Invention No. 4 in D minor was the winner of the annual Peabody Conservatory of Music competition; this was only one of the many accolades to come for Kerry Politzer. Her credentials as a pianist are daunting. She got her start at the tender age of three on a toy piano, and at age four graduated to her first real piano, which was handed down from her grandmother after she passed away. Kerry's natural ability fueled her steadfast determination for excellence throughout her youth. Politzer first studied her craft at the North Carolina School of the Arts, and later attended college at the New England Conservatory of Music. While studying to be a classical musician, she discovered jazz and fell in love with the freedom of the improvisational element. She became a pupil of renowned jazz professor Charlie Banacos, who was described by Bass Player Magazine as, “...the greatest American jazz teacher alive today." Under his tutelage, she began crafting notebooks full of jazz compositions and immersing herself in harmonic studies.

As a practitioner of the Third Stream philosophy, Kerry acts as a conduit for all the music she is exposed to, filtering and transmitting it through her own creative voice. This openness allows her to absorb all walks of music, from classic Brazilian pop to Seattle grunge rock. But it is Politzer's deep understanding of the harmonic concept that is one of the most unique elements of her sound. As a result, You Took Me In offers listeners a harmony driven blending of jazz, pop, rock, and Brazilian influences.

You might consider Kerry Politzer to be a classical musician who took a left turn and found herself captivated in a world of jazz. After three critically acclaimed instrumental jazz releases, she is expanding into the realm of the singer/songwriter with her new record You Took Me In. Politzer is often compared to Duncan Sheik, Norah Jones, Ben Folds, or a modern day Joni Mitchell. These are lofty comparisons, but her dexterous fingers and soothing voice seem to justify such claims.