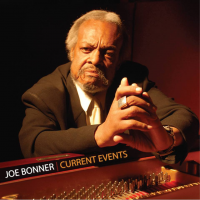 The extremely gifted composer and pianist, a resident of the Denver area since the early 1980s has passed away. Joe Bonner was born April 20, 1948 in Rocky Mount, NC, he died Friday, November 20, 2014 in Denver. He recorded and toured with many giants of jazz including Pharaoh Sanders, Woody Shaw, Leon Thomas, Harold Vick, Fred Wesley, Richie Cole, Carlos Garnett, Azar Lawrence, Roy Brook, Billy Harper and many others.

Joe had recently recorded a solo piano CD that was scheduled to be released in early December. Joe played in the KUVO Phyllis A. Greer Performance Studio many times over the years, three of those performance highlights are on KUVO's Live at the Oasis series of CDs, Volumes, 1, 4 and 7.

The entire music community of Colorado and the jazz world has been saddened by the sudden departure of the extraordinarily talented Joseph Leonard Bonner.