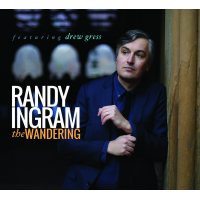 Pianist-composer Randy Ingram has put himself in a position to reveal more about his musical identity by scaling down to record The Wandering, a sophisticated, personal and enlightening duo album with bassist Drew Gress.

While other instrumentalists can choose a different mouthpiece or effects pedal to modulate and personalize their sound, pianists must develop their identity by how and what they play. Ingram has established his identity through his pianistic touch and sense of orchestration, earning many accolades over the years. As Kevin Laskey of NYC’s Jazz Gallery says, “It’s hard to make a piano sing. You can’t breathe into it, you can’t slide from one note to another. The piano is a mechanical music-maker, and it takes a real artist–an Ahmad Jamal, a Bill Evans, a Fred Hersch–to make it come alive. Pianist Randy Ingram is one of those artists. He has an immaculately honed touch and an unforced sense of lyricism.”

Ingram explains, “A jazz pianist’s true identity is defined equally by their tone and by the content of what they play: the specific shades and colorations of their harmonies, the types of textures they favor and the way they think about orchestrating and stating melodies—especially in the context of ‘standard’ repertoire.”

Ingram’s thoughts were reinforced by the opening of a new NYC venue, Mezzrow, that featured stripped down performances, mainly by pianists and bassists, filling a void created by the closing in the mid-1990s of the famed Bradley’s on University Place. Mezzrow has become an incubator and stage for pianists of all sorts to display their talents with the minimum of dressings, typically in duos with bass. The duo format resonated with Ingram, as one of the formative experiences in his musical development was a steady gig while at the University of Southern California with bassist Billy Mohler. Says Ingram, “I believe much of my stylistic identity started to form through playing that gig my last two years of college, and my memories of it have always made the duo format a very familiar and welcoming sound.”

As Ingram was developing repertoire for the follow up to his previous Sunnyside release, Sky/Lift (2014), he began to feel a pull in a different direction. The music he was writing for his quartet focused on deeper interplay between piano and guitar, becoming more densely orchestrated and heavily structured. Ingram found himself thinking about ways that his pianistic voice could be more clearly and spontaneously be heard.

For Ingram’s debut performance at Mezzrow, bassist Drew Gress was his ideal duo partner. Universally praised as a master accompanist and soloist, Ingram had long admired Gress’s playing, being familiar with the bassist’s solo recordings and work with Fred Hersch. The duo’s first gig together was exemplary: Gress’s playing was wonderfully supportive but also motivating, pushing Ingram to explore new musical areas. At the conclusion of the duo’s first performance, Ingram’s friend, the saxophonist Jeremy Udden, described what he had heard as a stripped down, truthful statement on the identity of, “Randy the player–Randy the pianist”.

Ingram soon decided to record a duo album with Gress. They performed additional gigs and lined up a date at Brooklyn Recording with engineer Michael Perez Cisneros. “I knew that a duo record was not without its challenges: the format is incredibly exposed, and there’s nowhere to hide, especially rhythmically,” explained Ingram. “But I also knew that Drew was as great a partner as I could find for this project. He has such a warm, nuanced sound and is a tremendously strong soloist, which I set out to feature as much as possible on the record. We chose to record in one session, in one room with no headphones or isolation, and the result, I hope, is an honest representation of who I am as a jazz pianist.”

“I thought about how the journey to one’s true identity could be described as wandering– a journey with no boundaries and no limits, and that certainly doesn’t take a linear path, “ says Ingram. “In arriving at the album’s title, I thought about the Japanese haiku poet Basho, the importance of wandering in the creation of his art, and how the same idea of wandering applied to my musical journey.” The Wandering is about this journey, the process of honing and expressing one’s musical voice.

The recording begins with Gress’s “Away,” a composition with a lovely melody and beguiling harmonies that showcases Gress’s unique writing. Ingram’s enchanting “Guimarães” was written for the Portuguese city, where the pianist was inspired by the juxtaposition of old and new, expressed here with his blend of classical harmony and voice-leading with modern harmonic and rhythmic ideas.

The spirited “Large Father” is Ingram’s tribute to Boston Red Sox legend David Ortiz in his last season; it takes a page out of Ornette Coleman’s book on creating freedom without losing melodicism. Jimmy Rowles’s “The Peacocks” is a favorite ballad of Ingram’s, who delivers a wonderfully moody and evocative interpretation.

Ingram’s version of Cole Porter’s “Dream Dancing” is deceptive: it retains the brilliant lyricism of the melody but has been extensively reharmonized. The album’s title track, “The Wandering,” is a tribute to British piano great John Taylor, a player who developed his own language with an astounding melodic sense, crystal-clear touch and multifaceted harmonies, which Ingram represents with aplomb.

Wayne Shorter is one of Ingram’s composing heroes and the saxophonist’s “Chief Crazy Horse,” with its insistent bass line, became the soundtrack of Ingram’s half-marathon training program. It provides a rhythmic juxtaposition to the duo’s repertoire. Ingram shows his lifelong appreciation for pianist Bill Evans through his up-tempo rendition of Evans’ “Show-Type Tune,” a favorite of Ingram’s for its harmonic genius. The recording concludes with Kenny Wheeler’s “Three For D’reen,” a rhapsodic piece that is delicately balanced between ballad and jazz waltz under Ingram and Gress’s impressive hands.

Wherever your path takes you, Sunnyside hopes that it leads you to as enchanting a place as does Randy Ingram and Drew Gress’s music on The Wandering, a lovingly conceived and performed program that achieves new heights of ingenuity through musical collaboration.