I wanted to be able to infuse Western harmonic movement into a modal system that doesn't have that type of motion (and many Indonesian musicians perhaps prefer it that way). 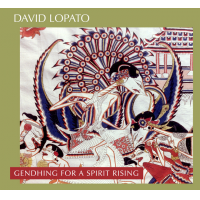 Musical genres have been melding for ages, yet pianist/composer David Lopato has developed an eclectic East-West fusion that truly has no precedent. A respected educator, inventive composer, inveterate musical explorer, and fearless sonic pioneer who has traveled a highly personal “silk road,” Lopato is releasing the extraordinary Gendhing for a Spirit Rising on September 8 via Global Coolant Records. This two-CD set is the culmination of the mesmerizing musical landscape he has cultivated since his first encounter with Javanese gamelan in the mid-1970s.

Along the way, including a pivotal year spent in Java as a Fulbright Scholar, Lopato carved out a niche for himself by crafting a fascinating and idiosyncratic instrumental voice that distinguishes him from others on the contemporary music scene.

“I wanted to be able to infuse Western harmonic movement into a modal system that doesn’t have that type of motion (and many Indonesian musicians perhaps prefer it that way),” Lopato explains. “I sampled the gongs not only because I needed them to be compatible with Western tuning, but also to reinforce that sense of harmonic motion. And I chose certain instruments (vibes, glockenspiel, and marimba) because their timbres are somewhat similar to those of the Javanese instruments upon which their parts are modeled.”

Every musical moment on Gendhing for a Spirit Rising is informed by Lopato’s decades of intensive study and experimentation that found him embracing stride piano, the post-bop continuum, avant-garde classical music, blues, Afro- Caribbean rhythms, and the traditional music of a myriad of other cultures, most importantly that of West Africa and of Indonesia.

Disc 1, Java, contains the recording’s title track, a four-movement symphonic work for 10 musicians marked by incantatory rhythms and shimmering textures. The opening movement “Ladrang” flows from Lopato’s work early in his career with Steve Reich and features a sumptuous melodic line above its churning rhythmic structure. “This Life” opens up space for improvisation, with Ehrlich’s alto and soprano saxophones leading the surging opening theme, which feels like a bebop steeplechase over a lush West Javanese landscape. “Jalan Jiwa” evokes the “walking music” of Wayang Kulit, the traditional Javanese shadow puppet play, while the expansive “Gendhing” is an ingenious melding of Javanese gamelan structure with Western instrumentation and tuning. (Gendhing is a general term used to describe pieces in the gamelan repertoire but also refers to the longest form in terms of gong cycle and overall length in that musical tradition.)

With Bill Ware’s vibes serving as a sonic bridge between Disc 1 and Disc 2, the jazz-steeped New York volume kicks off with “Beboppin’ with Bella,” a striking piece inspired by the interlocking metallophone lines in Balinese gamelan. The meditative “Jakshi” takes a Middle Eastern turn with its keening melody, and the cathartic three-part “Suite 911” flows from Lopato’s experience living up the street from the World Trade Center.

A prolific composer who has received grants from the National Endowment for the Arts for both jazz and classical music, Brooklyn native David Lopato made his recording debut with the critically praised 1982 solo piano session Giant Mbira (Lumina). He followed up with the highly dynamic 1993 trio session Inside/Outside (Enemy), and 1998’s The Standard Line (Unity), a duo project with baritone saxophonist David Mott. With his last album, Many Moons (Global Coolant), he returned to the solo piano format.

After earning his B.A. in music composition at Yale in the early 1970s, Lopato went on to study West African drumming and Javanese gamelan at California Institute of the Arts in the mid-1970s. Eight years later, with the aid of a Fulbright Fellowship, he was able to deepen his knowledge of Javanese music and culture at the source. “Much of the music on Disc 1 is an outgrowth of that experience,” he says.

On the faculty of the Jazz & Contemporary Music Department at the New School University in New York since 1991, Lopato has taught courses ranging from music theory, composition, and ear training to film scoring and the use of computer technology in music. A vital member of the New York City arts community, he produced a concert series at InHouse, a downtown Manhattan performance space devoted to contemporary improvised music, from 1990 to 2010.

David Lopato and his trio-mates, bassist Ratzo Harris and drummer Michael Sarin, will be performing at Cornelia Street Café in New York City on Monday 10/23, 8:30 pm.