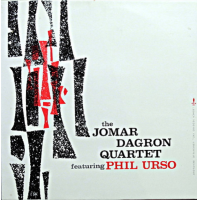 slideshow
In 1959, tenor saxophonist Phil Urso recorded a terrific album for the Legacy label with the Jomar Dagron Quartet in Louisville, Colo. Jomar Dagron wasn't a transplanted Scandinavian jazz musician. In fact, there was no such person named Jomar Dagron. It was a first-name amalgam of drummer Jo Jo Williams, baritone saxophonist Marvin Halliday, organist Dag Walton and tenor saxophonist Ron Washington. All were from Colorado and played there.

By the time of this recording session, however, Halliday had left to join Woody Herman, and Phil replaced him. Bassist Gene Klingman also was added. Interestingly, Billboard in June 1957, while reviewing the Jomar Dagron Quartet's Rocky Mountain Jazz album, noted the group needed a bassist. Phil had spent time in Colorado gigging with the quartet on tenor and baritone until 1964, when he returned to New York and rejoined Chet Baker for a few albums. Despite the personnel changes, the group remained the Jomar Dagron Quartet.

The music is spectacular for several reasons. Walton's Hammond organ here adds a groovy big-band feel while Phil cooks away, often in double time, with his Lester Young feel. On several tracks, he switches to baritone sax, which he plays just as artfully. To amp up the format, Phil engages in smart tenor battles with Washington throughout, and there's never a dull note. And Phil playing off the organ is unreal. Best of all is Phil's swinging soul. Every single measure is tasteful and beautifully articulated. Phil is easily an underrated tenor saxophone great, and this album proves it beyond a doubt. Phil died in 2008.