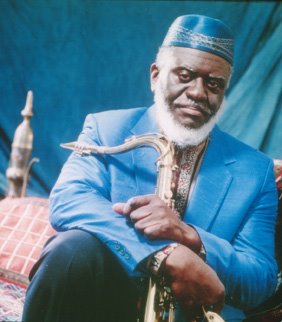 slideshow
Pharoah Sanders, a tenor saxophonist who initially was associated with free-jazz players in the 1960s, including Ornette Coleman, Sun Ra, Don Cherry and John Coltrane, but who went on to record several critical pan-African spiritual albums under his own name before developing a softer, more romantic sound in the 1980s and beyond, died on September 23. He was 81.

Born in Little Rock, Ark., Farrell Sanders changed his first name to Pharoah in the early 1960s at the urging of Sun Ra, who either misheard Sanders' name when introduced or thought the mistaken name was more befitting. Why it was spelled with the “o" and “a" reversed was either an error that stuck or was purposefully misspelled to for emphasis on the “oh" to stand out.

During his free jazz period, when he mirrored Coltrane's overblowing and “sheets of sound" techniques, Sanders came in contact with Impulse Records and was signed by the label a year before Coltrane's death in 1967. But rather than function as an extension of Coltrane's fire-hose approach, Sanders developed an hypnotic, spiritual and organic style, emerging with his own sound.

While Sanders continued to record jazz deeply influenced by African culture, he also recorded jazz and songbook standards. In many respects, his approach on standards seemed to be more  influenced by Sonny Rollins than Coltrane. My last post on Sanders is here.

Here are 10 tracks to give you a feel for the late Pharoah Sanders:

Here's Sanders with alto saxophonist Gary Bartz playing the title track from Another Earth in June 1968...

Here's The Creator Has a Master Plan, which runs 32 minutes from Karma and is perhaps Sanders' most important original work...

Here's The Night Has a Thousand Eyes, from one of my favorite Sanders albums, Moon Child in 1989, with Bill Henderson (p), Stafford James (b), Eddie Moore (d) and Cheik Tidiane Fall (perc)...

Here's Sanders' full album of Welcome to Love, from July 1990, opening with You Don't Know What Love Is...

Here's After the Morning live with John Hicks on piano in the 2000s...

And finally, here's a Pharoah Sanders interview and performance in 1985...

Bonus: Here's Sanders at the 1968 Antibes Jazz Festival in France with Lonnie Liston Smith on piano, Norris “Sirone" Jones on bass, Majeed Shabazz on drums and an unknown bongo player... .