Performance And Visual Artist Diane Hoffman To Release Third Album Do I Love You Produced By Ulysses Owens, Jr. Featuring A Dynamic Ensemble

To give love, to be in love, and to hold onto love is to spread wings that fly and lift your feet right off the ground. This CD takes on the ecstasy of love, the secrets of private love, and the loss of great love. 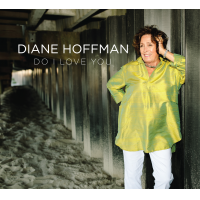 Hoffman, a formally trained visual artist, has had her work exhibited extensively throughout North America and has maintained an equal balance between her painting and music. As a vocalist, she has studied with notable entertainers such as Anita Darian, Bernard Fisher and Barbara Maier Gustern, and has performed across the eastern United States in a range of music venues, performing arts centers, cruises, and festivals, in addition to having appeared on radio and television.

On her newest project, Hoffman chose to cover numerous standards including “Do I Love You,” “I’m Gonna Go Fishin’,” “Crazy In The Heart,” and “Small Day Tomorrow,” among others, which are brought to life by her rich vocals paired with the hard-swinging ensemble led by Owens. She also selected several less known songs written by the late actress and vocalist Anita Darian as a result of their connection. The pieces offer a nice compliment to the classic repertoire and hold a special meaning to her; the songs include “You Are Out Of My Life,” “When You’re In Love,” and “Kindly.”

Do I Love You was inspired by a commitment to share aspects of Hoffman’s personal life. In preparation, the singer tirelessly searched catalogs of songs to select lyrics that deeply touched her. She felt strongly that it was important that listeners share a personal connection to the story painted through the lyrics, and that the words chosen needed to be entirely authentic for both her and her audience. Hoffman states “If I am able to give truth to the handling of the lyrics, then my mission as a singer is successful.” She adds “To give love, to be in love, and to hold onto love is to spread wings that fly and lift your feet right off the ground. This CD takes on the ecstasy of love, the secrets of private love, and the loss of great love.”

Hoffman is dedicating Do I Love You to her first grandchild whose eyes are just opening to the love that surrounds her. The album was recorded at Big Orange Sheep Studios in Brooklyn, NY (March 28-29, 2018) and Mixed & Mastered by Dave Darlington at Bass Hit Studios (May 30-31 and June 28, 2018). It will be available on all major music platforms on October 9, 2018.