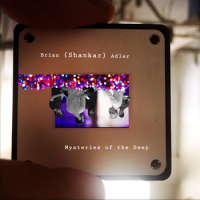 With two new EPs, percussionist/composer Brian Adler offers listeners beautiful and arrestingly original music via two formations of his newest project: Shankar. On Binary, he performs with the trio, featuring pianist Santiago Leibson, bassist Rob Jost and a computer. The other album, Mysteries of the Deep features the quintet with Leibson and Jost as well as vibraphonist Matt Moran and guitarist Jonathan Goldberger.

Adler has created a musical language and world where surreal musical landscapes and structures are created with layered mantras, drones and rhythmic riddles. He is mapping out new pathways to achieve a state of balance between polar forces: sound/silence, stability/instability, form/freedom, human/machine. In doing so, he creates music that exploits, solves and raises questions about the imbalances often caused by these polar gravities.

On Binary's first track “Drone," Adler is inspired by childhood memories of the tamboura, a plucked string instrument from India, which offers a rich atmospheric canvas and evokes the subtle hum of the universe. “I wanted this piece to have a similarly meditative effect, but with the addition of a rhythmic element,” Adler says. “There are two opposing and conflicting sides to this game piece, which are juxtaposed and rely on one another’s inherent qualities to create a balance.”

The title track, “Binary” is Adler’s response to the prediction that humans and machines will someday merge and become one. It asks: will humans one day be able to hear and make sense of binary code? For this remarkable four-part composition, Adler created a computer algorithm that transformed the text of a poem he wrote about the philosophical man-machine identity crisis into binary numbers and then into rhythms. “I layered the resulting rhythms in different grids to create counterpoint, and then composed pitches to those rhythms,” he explains. “Lastly, I opened up a few sections for improvisation.” The piece begins with a computerized hi-hat playing the coded rhythmic equivalent of “Am I a robot or an ape?” in sixteenth notes while Adler plays the same phrase in triplets on the ride cymbal. It ends with a climactic chorale of many questions being asked over and over with the top voice suggesting: “the secret is in the code.”

The trio, augmented by computerized midi tracks, brings Adler’s four-movement meditation on the human/machine dialogue— or struggle—to life. Even without knowing about Adler’s algorithm, listeners can sense the underlying structure, a mysterious force unifying the diverse elements at play in the music. With its broken rhythms and the diverse interplay of timbres and textures, it is in constant motion, yet never sounds chaotic.

In contrast to the inherently broken quality of Binary, Mysteries of the Deep displays a similar compositional resourcefulness, but with a more human ingenuity.

The melody of the opening track, “Mantra” follows the rules of the mysterious Rag Chandrakauns, a traditional Indian scale or mode performed late at night. The band maintains a beautiful collective sound as they play the haunting melody and then extend and develop it with improvised variations. “It is believed that through repetition of a mantra, one will reach a state of bliss, or liberation,” Adler explains. “This piece tests this principle without the use of text, inviting the listener in through the evolving repetition of melody.”

Adler says that “Windy Path” is inspired by a trail that he used to walk in the woods. “It was a very quiet place and my memories of it are very dreamlike,” he says. The composition, a blues made up of two opposing rhythms that constantly pull on one another, generates a sense of creative tension as the band holds the opposing forces in perfect dynamic balance.

“Pulses” is a glimpse into a subterranean world. It is built using five related yet differing pulses that begin on the lowest notes of each instrument. As the music builds, an increasing feeling of unity emerges from the interactions of the five diverse lines.

Adler explains that “Rudram” is based on a Vedic text that Brahmans chant around a fire pit using permutations of three notes. “I learned several dozen verses as a child,” he says, “and wrote this piece adding a groove and a bridge allowing the band to depart into other spaces.” The band hovers around the melody and departs from it as they solo, always remaining centered on Adler’s infectious groove.

Brian (Shankar) Adler is a prolific drummer, percussionist and composer from Brooklyn, NY. Often creating from a drum set augmented with percussion instruments from India and South America, he is known for his stylistic range and for organizing a diverse number of projects simultaneously.

Critics have noted his earthy, nuanced sound, and attention to texture, and his forward thinking rhythmic concepts. “Adler’s music flows organically in pursuit of mystery, movingly existing in an ultimate state of fluidity,” says Jordan Richardson of Canadian Audiophile.

As a leader, Adler has released five records with Helium Music Project, Four Across, and Prana Trio. He has also worked with an array of notable musicians and bands including Bombay Rickey, La Bomba de Tiempo, Harvey Diamond, Four Across, Guillermo Klein, Kate McGarry, Elizabeth Swados, and Ray Vega, among others. Adler’s first musical experience came at the age of five while residing at an ashram in the mountains of upstate NY. There, he was taught to recite classical Indian drum syllables and play the corresponding finger patterns on his knees. He went on to attend the New England Conservatory, studying with Bob Moses and Ran Blake among others, who helped him to discover his voice by blending several traditions.

Since then, Adler has toured Europe, North and South America, performed at Carnegie Hall, Lincoln Center, Symphony Space, Clear Water Festival (New York), Konex (Buenos Aires), the Ear Shot Jazz Festival (Seattle), Pasinger Fabrik (Munich). He has been featured on WNYC’s “New Sounds,” at the South by Southwest Festival and recently, on the score of Of Many, a film produced by Chelsea Clinton and featured at the Tribeca Film Festival.

Guitarist Jonathan Goldberger spent most of his youth on the outskirts of the Everglades in Florida. From there he migrated west to the Rockies (where he studied with musical guru Art Lande and played and toured with the cult spacey/bluesy Fat Mama) before finding his way to Brooklyn in 2001. He has worked extensively in both the music and film worlds, including composing and producing the music for the award winning feature films, Trans, and The Hawk is Dying. He currently plays guitar and has worked with artists including Red Baraat, Jim Black, John Zorn, and Joe Russo among many others, and has just released the CD Surface to Air a collective with Rohin Khemani (tabla), and Jonti Siman (upright bass).

Santiago Leibson is a pianist from Buenos Aires, Argentina. In 2014 he graduated from the Conservatorio Manuel de Falla and moved to New York City. His trio has released two records: Amon (2013) and Pendular (2014). In 2016 he released his latest work Out of Orden (2016) featuring bassist Drew Gress and drummer Devin Gray. He has also performed and recorded with Alan Ferber, Billy Drewes, Michael Rodriguez and Lenny Pickett, “Guillermo Klein’s Symmetrical Moon Vamps”, Jeff McGregor Quintet and Brian (Shankar) Adler.

Rob Jost (bass) is one of NYC’s most sought out musicians, having performed with Bjork, Imogen Heap, Jesse Harris, the Saturday Night Live band, the Sesame Street Band and Kevin Hays. He is also a volunteer French horn instructor at youth camps in Haiti. He is a verbal pun master.

“There is a visceral excitement in this music... Adler’s characteristic rhythmic stride ignites the whole work.”—Raul D’Gama Rose, All About Jazz