SOURCE: ALL ABOUT JAZZ @ SPINNER
December 18, 2010
Sign in to view read count 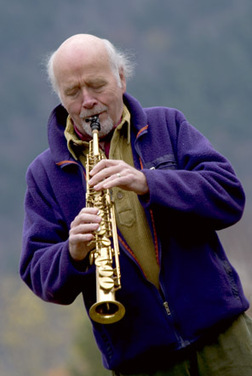 slideshow
There are a number of holiday traditions to celebrate this time of year, including such religious ones as Christmas, Hanukkah and Ramadan. And I've gotten albums celebrating all three. But for the last 30 years around this time, New York City's Cathedral of St. John the Divine celebrates the Winter Solstice with a performance by Paul Winter Consort as well as a cast of guest musicians and dancers. Winter has a long background in jazz, recording his first album back in the late '50s and was signed to Columbia Records in 1962 by the legendary John Hammond.

Soon thereafter, the saxophonist/reedist embraced Brazilian music and subsequently began to draw upon other cultures as well as issues surrounding the environment, becoming inspired by what he calls “the greater symphony of the earth." These days, this kind of ambient fusion of styles is called New Age music, and Winter has won several Grammys in this genre, but listeners of his music can still hear plenty of jazz and jazz musicianship in the Paul Winter Consort.

Regardless of genre labels, this celebration of the longest night of the year is, by all accounts, a special one, both to Winter and the 5,000-6,000 people who attend each performance in the world's largest cathedral. Such is the popularity of these events that Winter and Consort do three performances for the Winter Solstice: This year, they fall on December 16, 17 and 18. Winter also celebrates Summer Solstice (for the past 15 years), and an Earth Mass is held on the day of the Feast of Francis, but the Winter Solstice is what started it all. I caught up with Winter (Paul, that is) via phone from the cathedral stage as he prepared for the performances.

Spinner: Cathedral acoustics are great for choirs but can be tricky for musicians of other genres. I would think musicians would run from that kind of situation.

Paul Winter: There're two sides to that. No, I think musicians would run right into the cathedral because I think many players love to play in interesting spaces with a special ambiance and acoustics. If it was symphonic music with a whole gaggle of players, they might hesitate because complex music can get very muddy in a cathedral. I do know a couple of prominent classical musicians who don't care to play here at the cathedral—they'd much rather be in Carnegie Hall. But I feel just the opposite, though I love to play Carnegie Hall. There's something completely beyond in playing in this cathedral.

And the other side?

The other side of that is that the first time I was invited to perform here I did decline, but that was because I didn't feel ready. I declined again next year. Finally, in 1979, I was sitting with a friend of mine who was a tai chi dancer and the dean of the cathedral was there, as well, and we were sitting at this picnic table at an event in Colorado, and my friend Al said, “I've always wanted to do a program called 'The Tao of Bach' because I think Bach was a Taoist." And I said, “Well, I've always wanted to do something called 'Consorting with Bach,' arrange Bach for the Consort's instrumentation, because saxophone players don't get many chances to play Bach. And the Dean chimed in: “Why don't you put those two ideas together and perform it at the cathedral." I couldn't say no.

When was the first time you went to the cathedral?

In '74, for the funeral of Duke Ellington. It had been so profound and overwhelming that it remained one of those epiphanic milestones in my life. The sound of Ella Fitzgerald singing 'Solitude' at Duke's funeral, and members of the band playing, hearing Johnny Hodges' saxophone playing coming from the vault of the cathedral through the sound system, I wouldn't have imagined that I would ever get to play such a place.

When did you get a sense that the solstice performances would become something very special?

The very first one. After the Bach performance, the dean asked us to become artists in residence for the cathedral. I was just overwhelmed again. Then I asked, “What does that mean?" And he said, “You can do anything you want!" He totally embraced who we were and embraced the ecological dimension to our music because one of his wishes was to build a bridge between spirituality and ecology, which he did for 25 years.

What made you think of the solstice?

I figured I had the greatest forum I could ever imagine, outside of the Grand Canyon, so I figured out the biggest milestone of the year that everyone could celebrate. And I figured it was the Winter Solstice because it was the most inclusive event if you happen to live on planet Earth. We did the first one and we had 4,000 people come, and it felt absolutely right.

How has the performances changed over the years?

We've moved the stage from the nave at the back to the center of the cathedral because once it filled up we realized that people in the back were really getting shortchanged. Then we started exploring the vertical elements of the space with the Earth ball that comes through the cathedral and ascends up into the vault while spinning. The sun gong at the eastern end of the cathedral rises up 12 stories with its player and it is hit at the symbolic moment of solstice. We've added dancers, like the African group Forces of Nature, who are also artists-in-residence. They've been doing it for 25 years. We've also brought in a lot of people from different cultures. There's also a 20-foot spiral aluminum tree of sound that is the Solstice Tree, and it's hung with hundreds of bells and gongs, which symbolizes the diversity of life. The performance has become a real sound spectacle.

How has your training as a jazz musician prepared you for all this?

It's all the same. The instruments are different from when I had my bebop sextet and there is a much bigger variety of music, but the approach is exactly the same. The embracing attitude of jazz is that jazz invites everyone to come in. You play what you play. For me, though my fans have changed over the years, I feel an unbroken tradition with the very first band that I came out of college with in 1961.

Those interested in the Paul Winter Consort's latest can track down 2010's 'Miho: Journey to the Mountain' (Living Music), which is a work based on Winter's explorations in sound, spirit and space of the I.M. Pei-designed Miho Museum in the Shigaraki Mountains of Japan.