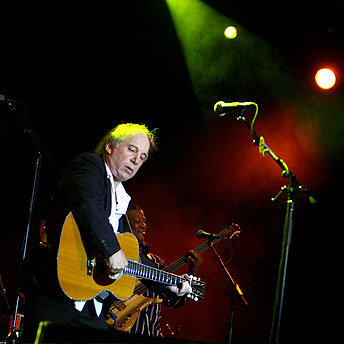 slideshow
Diamonds on the Soles, Paint on the Walls, Nostalgia in the Air
Paul Simon on Friday in the first performance at the newly remodeled Beacon Theater. He played a grab bag of hits from throughout his career. More Photos » Multimedia

To welcome the new president Paul Simon played “American Tune,” a sigh of exhaustion reportedly written in response to Richard M. Nixon’s re-election in 1972: “I don’t know a dream that’s not been shattered/or driven to its knees.”


The renovated Beacon Theater, on the Upper West Side, before Friday’s concert. More Photos > Of course the president he was welcoming was Jimmy Carter, at his inauguration in 1977.

That same song was used last year in an advertisement promoting Barack Obama, and Mr. Simon played it on a November appearance on “The Colbert Report,” in support of the release of his book “Lyrics 1964-2008” (Simon & Schuster).

But “American Tune,” and its pessimism, were nowhere to be found during Mr. Simon’s Friday night show, the inaugural performance at the newly renovated Beacon Theater, which has reopened following a $16 million makeover by its operator, Cablevision Systems. (Mr. Simon also played there on Saturday.)

Politics of another sort were on Mr. Simon’s mind — namely, those at the intersection of the city’s financial and artistic worlds.

“The Dolans did an incredible job on this place,” Mr. Simon said, referring to the family that controls Cablevision. “Turn the lights on for a minute.” Noting the restored murals on the walls, he said, “There are the Allman Brothers.” (The Allmans, near-annual regulars at the Beacon since 1989, are not on the walls.) At intermission he had a deadpan entreaty for the well-heeled crowd: “Make some deals and answer your e- mail.”

Biceps popping out of his black-and-white-striped polo shirt, Mr. Simon, 67, played a grab bag of hits from across his career in a manner both committed and indifferent. Some high points were expected (“Diamonds on the Soles of Her Shoes,” “Slip Slidin’ Away”) and others not (“The Cool, Cool River,” “Father and Daughter”). In “Loves Me Like a Rock,” “Proof” and other numbers Mr. Simon’s upper body undulated unconsciously, suggesting a sort of kinesthetic memory at work. But even as his frame connoted joy, his vocals didn’t always. At times they verged on dour.

There was a cheerful suite from “The Capeman,” Mr. Simon’s ill-fated 1998 Broadway musical, in which he was joined by a doo-wop ensemble (including the genial salsero Frankie Negrn), and an uninspired run of songs with the Brazilian jazz singer Luciana Souza. When Mr. Simon announced that he’d be playing a new piece, “Love in Hard Times” — “a song I wrote in the last year; that seems to be my output per year” — he was met with dissent from someone in the balcony: “Play stuff we know!”

Mostly he did: significant chunks of the albums “Graceland” (“You Can Call Me Al,” a hit that looks more and more bizarre the farther away in the rearview mirror it gets, earned one of the night’s loudest responses) and “The Rhythm of the Saints.”

After all, only in part was this a Paul Simon show; it was also a coming-out for the remodeled Beacon, with an audience including Mayor Michael R. Bloomberg, James Gandolfini, Harvey Weinstein and Paul McCartney, who arrived at intermission and threatened to attract more attention than the headliner.