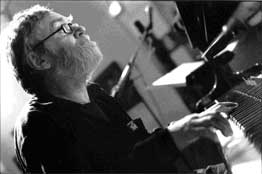 slideshow
Piano players are coming out of the woodwork at Outpost 186.

Mothers Day saw an astonishing turnout for Matthew Shipp, who followed a solo set with a long awaited Jim Hobbs duet, sponsored in part by All About Jazz. A snippet of the night awaits below.

After a respite from Memorial Day, Hans Poppel has a special concert with area colleagues on Tuesday, June 7th at 9PM following the Julee Avallone Free Jazz Jam at 8PM.

Pandelis Karyorgis meets the piano on the next night, Wednesday, June 8th with Steve Swell carting his trombone up from NY and Guillermo Gregorio on clarinet all the way from Chicago.This will be the trio's first Boston-area performance. Both original music and improvised pieces will be featured.

And the piano barely gets to cease its ringing before Eric Zinman introduces it to Francois Tusques in the latter's first area appearance on Tuesday June 14.François Tusques, considered to be the father of French free jazz, will perform two piano concerts with Eric Zinman following performances in New York at Vision Festival. These are duets for two pianos, something rarely available.

David Bryant and Steve Lantner engage the piano every month.

And when the piano gets a rest there are guest collaborations courtesy of Jeff Platz and Junko Fujiwara.

Ras Moshe is a guest in June on the 10th as part of an ongoing outreach effort by Mr. Platz that has included Daniel Carter and Nonoko Yoshida in past outings.

Junko's Green Umbrella Series is the like heart and soul as she crafts memorable evenings with a ready alacrity.

Luther Gray often uses his nights to work out the charts he constantly crafts.

Jacob William applies his nights to highly focused improvisation where sweat is an essential precondition. Forbes Graham mixes it up and is seemingly everywhere.

And weaving through it all is the presence of Jim Hobbs, the Mayor of Boston area modern Jazz

Off on the July horizon, Adam Rudolph will join Joseph Bowie in a rare duet on Wednesday, July 20th.

The Outpost is the epicenter of the Boston Free Jazz world located in a circa 1860s home turned into a performance space in unlikely Inman Square, Cambridge.