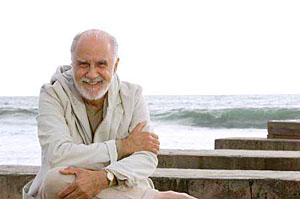 slideshow
Famous from age 16, Oscar Castro-Neves toured with Dizzy Gillespie and Stan Getz and orchestrated music for films and TV.

Oscar Castro-Neves, a Brazil-born guitarist who helped to create the cool, sensuous rhythms of bossa nova and orchestrated music for movies including “L.A. Story" and “Dirty Rotten Scoundrels," has died. He was 73.

Castro-Neves, who was noted for both his virtuosity and his impish sense of humor, toured with jazz greats Dizzy Gillespie and Stan Getz. For 10 years, he was guitarist, musical director and vocal coach for Sergio Mendes' Brasil '66 and went on to produce albums by luminaries as varied as cellist Yo-Yo Ma and jazz harmonica player Toots Thielemans.

“Oscar was the greatest fountain of music I've ever known," saxophonist Paul Winter told The Times on Sunday. “And he was perpetually funny."

Born May 15, 1940, in Rio de Janeiro, he was one of eight children in a musical family. With his mother playing guitar and an uncle playing cello, young Oscar took up the cavaquinho, a small, traditional Brazilian guitar, and piano.

“My uncle taught me the hip chords, and I was hooked," he told jazz pianist Ramsey Lewis in a 2005 PBS interview.

At 16, he was a huge success. After a recording artist heard Castro-Neves play at a party, his composition “Chora Tua Tristeza" (Cry Your Sadness) rocketed to the top of the charts and was widely recorded by others.

“It became the kind of song played at people's weddings," his wife said Sunday.

Shortly after the sudden fame, Castro-Neves heard the milkman singing one morning and ran outside in his pajamas.