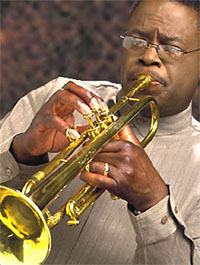 slideshow
Music lovers probably will argue for all time over whether Ella Fitzgerald or Billie Holiday was the greatest female jazz vocalist of the 20th century.

But whichever side of that debate you take, there's no question that Fitzgerald set a still- unmatched standard for scat singing and improvisational techniques of her own making. That she conquered both the swing and bebop eras, while also crossing over into mass popularity via the “Songbook" albums she recorded for Norman Granz, attests to her exalted stature in American musical culture.

And then there was the ineffably expressive character of her voice, an instrument that could be soft and supple in ballads and positively incendiary in hard-charging bebop. In short, there was no musical form that Fitzgerald could not master.

Perhaps that's why Chicago trumpeter-bandleader Orbert Davis chose to enlist four singers for the Fitzgerald tribute concert he's leading Saturday night at the Auditorium Theatre with his Chicago Jazz Philharmonic. Even with the considerable firepower of vocalists Dee Alexander, Bobbi Wilsyn, Joan Collaso and Jackie Allen, the musicians at best can hope to hint at the splendor of Fitzgerald's work rather than equal it.

“Ella was so giving," says Davis, who immersed himself in Fitzgerald's music and life story to prepare for this concert, which he's calling “Through Ella's Eyes."