SOURCE: SOMETHING ELSE!
October 19, 2010
Sign in to view read count 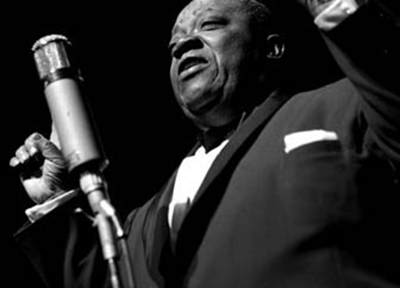 Every so often, a singer gets so dispirited, laid so low, that he's simply got to talk back to the blues.

I love those songs. Think Billie Holiday's “Good Morning Heartache," and this one—recorded by Jimmy Rushing with a sizzling early edition of the Count Basie Orchestra. Included on the Decca date are Lester Young on trumpet, Buck Clayton on trumpet, Freddie Green on guitar, Walter Page (with whom Rushing had an early association in the Blue Devils, out of Little Rock, Ark.) at the bass, Jo Jones on drums, and arranger Eddie Durham on trombone.

Rushing's conversational style fits the tune perfectly, as he introduces himself—"I feel alright, but I've come to worry you"—then makes the eternal plea of the lonely: Bring back my girl.

Before long, though, Rushing begins to question his own request—knowing he's got to settle his emotions a bit after so long away: “Don't show me my pretty baby; I'll break all of the laws!"

Finally, while the riffy blues interplay behind Rushing continues unabated, Rushing figures he'll ask for his lost love to return as a Yuletide surprise: “Santa Claus, Santa Claus, listen to my plea&#151don't send me nothing for Christmas, but my baby back to me."

A native of Oklahoma City, Okla., Rushing was a talented multi-instrumentalist; he played both piano (as in the embedded video below of “Good Morning Blues" from 1962, with slightly different lyrics) and also the violin, before finally turning to vocals.

Rushing made an early impression beginning in 1929 during a stint with Bennie Moten's group, with whom he stayed until Moten's passing. Rushing joined Basie's band in '35, and moved from the midwest to the Big Apple a year later.