On October 25th, The Chart-Topping King Of Smooth Urban Jazz Kim Waters Returns With New CD This Heart Of Mine 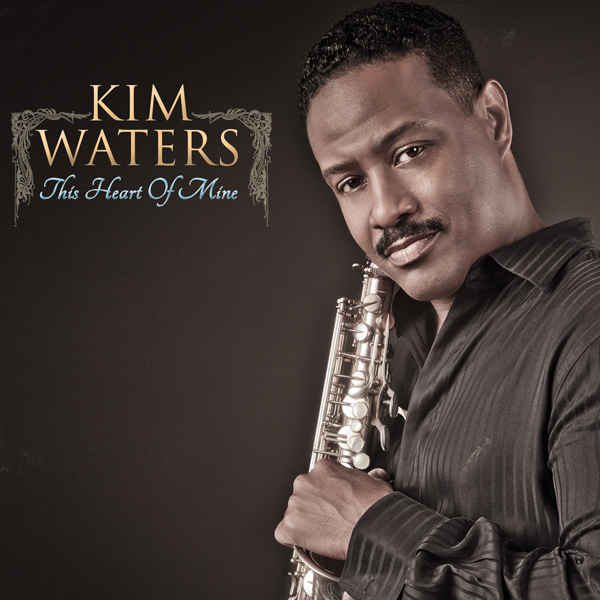 Kim Waters has been heralded as “simply one of the planet's best saxophonists" by Jazz Times Magazine and touted as a “romantic pied piper" by The Washington Post. Waters has built an impressive and enviable career giving his fans what they want, along the way garnering praise from critics and fans alike and becoming one of the top five best-selling instrumentalists in jazz. His winning combination of sensitivity and brawn, intellect and emotion, coupled with his technique and soulfulness have helped him to score over thirteen #1 hits and over 20 Top 10 hits.

Everyone from Al Green and Isaac Hayes to Phyllis Hyman, Kenny Lattimore and Teddy Riley and Guy have tapped his creative genius. In the Summer of 2011, Waters also had a song featured in the movie Larry Crowne starring Oscar winning actors Julia Roberts and Tom Hanks.

Never one to rest on his laurels, the prolific saxophonist is constantly creating. “When I am in the studio there's got to be a perfect mixture of romance, groove, melody and catchy hooks that are both memorable and singable. If the music is right it can appeal to both a two year old and a 90 year old!" confesses Waters. For the debonair, laid back and talented multi- instrumentalist, music is simply a way of life. “It is always my hope that my music will be a vehicle to touch and inspire people in some kind of way."

A trendsetter, Kim Waters was one of the first instrumentalists to break on the Quiet Storm radio scene garnering airplay around the country. He has long been admired for his unparalleled ability to combine the finer elements of Jazz, R&B and Hip Hop. “The industry has changed drastically since I came on the scene in the 80's. There were no 'Smooth Jazz' radio stations when I first started out and so my music was embraced on Urban and Urban AC stations," explains Kim. “For me the fusion of jazz with R&B is natural because I have listened to, loved and studied both all of my life."

On October 25, 2011, Kim Waters will release his 17th album as a leader and tenth for Shanachie Entertainment, This Heart Of Mine, which artfully showcases why he has long held the throne as the King of Smooth Urban Jazz. This Heart Of Mine finds the saxophonist doing what he does best&#151creating dreamy melodies, sultry ballads, reinventing timeless R&B hits and playing funky dance-inspired and hot stepper originals. Waters brings to life a tapestry of love songs that explores the full range of emotions that love sparks.

Like Prince, Marvin Gaye and D'Angelo, Kim Waters is a wizard in the studio and musically blessed with the ability to play multiple instruments. Kim is a one-man band and plays virtually every instrument heard on This Heart Of Mine, from the saxophones to keyboards, guitar, drums, bass and vocals. The CD opens with the soulful and inviting “Heart Seeker," which shines light on Waters' undeniable knack for crafting unforgettable melodies and songs that take you on a journey.

The album's first single “Free Fall," reunites Waters with celebrated producer Davy D. The dynamic duo joined forces for the #1 hit song “Water Fall" from Kim's 2002 recording Someone to Love You. “Working with Davy D comes very easy because he has this amazing ability to create incredible tracks," says Kim. “Once he creates the beats I then add my own jazz vibe and the result always turns into something amazing! Davy D is great at everything he does."

A highlight on This Heart Of Mine is the sublime Kim Waters ballad “Am I A Fool," featuring several-time Grammy nominated Soul Prince, Calvin Richardson. The duo also has a stunning new video that takes the song to new heights. “'Am I a Fool' is a song that I wrote about a man who is so in love with his woman that he let's her run all over him and take advantage of his kindness," explains Kim. “I have witnessed this with several friends and was inspired to write this song."

“Am I A Fool" has all the ingredients for a hit at urban radio. In recent years Waters has garnered a new fan base recording such diverse projects as The Sax Pack (with fellow saxophonists Jeff Kashiwa and Steve Cole) and his own Streetwize and Tha' Hot Club CDs that are known for their clever re-workings of the hottest hip hop, R&B and reggae hits on the radio. On This Heart Of Mine, Waters does a hot buttery soul rendition of the R. Kelly ballad “Love Letter" as well as takes on the Alicia Keys and Jay- Z smash hit “Empire State of Mind." The latter features Kim Waters' wife and vocalist Dana Pope, who is also featured on the Streetwize recordings. “I decided to record 'Love Letter' and 'Empire State of Mind' because I am a fan of both R. Kelly and Alicia Keys. Both of these songs have true messages. 'Love Letter' is an open expression of love that I can relate to while 'Empire State of Mind' offers an inspirational message of hope and the fulfillment of dreams."

No Kim Waters CD would be complete without his trademark—get your groove on— dance floor anthems. Songs like the uplifting and in-the-pocket “The Groove's Alright," “Running To Love" and Waters' ode to dedicated Steppers around the country, “Step to This," demonstrate the saxophonist's delicate balance of jazzy grooves with R&B flavor. Waters once again hits the mark with his seductive ballads “I Love My Girl" and “Stay With Me Tonight." He penned “Double Two Love" for his musically gifted twin daughters, Kimberly and Kayla. “Being a Dad is the most important job and my family is my main inspiration," confides Kim. “Kimberly and Kayla are the key to my heart and they inspire me to continue to create my music and keep it fresh. They are truly angels. Even though they are 21 years old this year, they will always be my little girls. 'Double Two Love' is my way to express my love for them through music and gives them something to share with their friends and family forever!"

Inspired by such jazz luminaries as Duke Ellington, Herbie Hancock, George Duke, George Benson, Cannonball and Grover Washington, saxophonist Kim Waters was born into a musical family. The Maryland native picked up his first instrument, the violin, at the age of eight. “That didn't go over well with the fellas," says Waters, who later found his calling on the alto and soprano saxophones at 13. Shortly afterwards he began playing in a band with his brothers, James (who he still performs with) and Eric, and his old friend, pianist Cyrus Chestnut. Over the years, Kim Waters has been called on to perform with or open shows for the best including Al Green, Isaac Hayes, Phyllis Hyman, Teddy Riley and Guy, and Gerald Albright to name a few. Waters recently relocated to Sacramento, California from his longtime home in Aberdeen, Maryland.

This Heart Of Mine is sure to further endear old Kim Waters fans and bring new ones to the forefront. It is confirmation that Kim Waters has rightfully been crowned the King of Smooth Urban Jazz and that he is here to stay! Waters concludes, “I enjoy helping others and it is my hope that my music in some way brings positivity to the world. I believe that the world cannot live without new music. I know I can't!"

“He is the pied piper of smooth jazz." Upscale Magazine

“Waters is simply one of the planet's best saxophonists." Jazz Times

“The man can play....he continues to add a sense of sensibility to the smooth-jazz airwaves." Jazziz

“Kim Waters has a flair for composing seductive melodies. He is like a romantic pied piper out on a long evening stroll." The Washington Post

Kim Waters: This Heart Of Mine